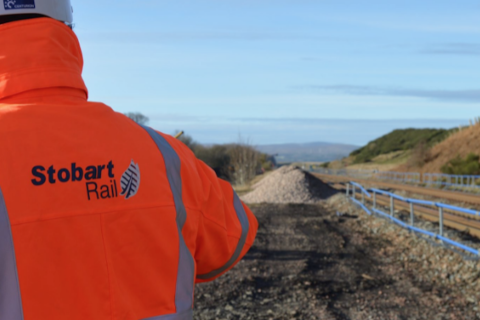 Stobart back in UK rail business under new management

The rail and civil engineering assets of Stobart Group have been bought out of dissolution by German investors Bavaria Industries, which specialises in engineering recovery. The other business with the Stobart name withdrew last month from the railway and civil engineering arena, to concentrate on aviation interests – which include regional airports at Southend near London and Carlisle Lake District on the English side of the border with Scotland.

Now, just a matter of weeks after the doors closed on the familiar company, it is back, this time with a German accent and a new optimism for recovery. RailFreight.com reported on the closure of the business at the beginning of June (read the story here). Back then, Stobart Group was facing up to a trading loss for the financial year of almost 150 million British pounds (169 million euros). That is the main reason why the plant hire and civil engineering business has changed hands for a token one thousand pounds, or eleven hundred euros. BiAG closed on the Frankfurt markets at a near year-high of 58 euros on the news.

Stobart up in the air

Whether this means a return to the UK rails for the familiar yellow and blue livery remains to be seen. What is clear is the future of the 188 employees, who will transfer immediately into the new company. That’s good news for the Carlisle headquartered operation, which otherwise faced a bleak future.

In a statement to the market, Warwick Brady, the chief executive of the Stobart Group reiterated their course of action. “In June we set out our strategy which will see the group focus its investment on our aviation assets, particularly London Southend Airport”, he said. “The sale of the rail and civils business removes the obligation for the group to fund the expected ongoing losses of the rail business and is a first step in achieving our goal of focusing our investment on aviation.”

Bavaria keeps its feet on the ground

At a time of economic uncertainty in both rail and aviation fields, the two partners in the deal have differing views on the viability of the former. Stobart has effectively written off around nine million pounds (9.93m euros) in assets, while Bavaria Industries is taking on an operation cleared of debts, but with a contract under negotiation which, if secured, will require them to pay a consideration to Stobart Group of almost three million pounds (3.3m euros).

The fun-loving Germans were as happy as opening night at Oktoberfest. “We are really excited about working together and hope that being free from the large corporate parent will release the team’s entrepreneurial flair”, said their spokesperson. Let’s hope taking on the ailing company is not a sobering experience.