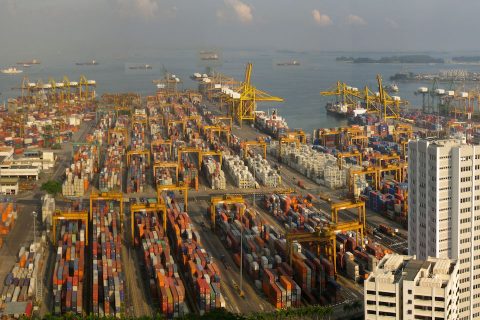 Disruptions to the international supply chain have put container traffic in a spin. Racking up storage fees may be welcome income for port operators, but only while sufficient capacity exists. With intermodal accounting for nearly half of all movements, what might container issues mean for UK rail freight companies.

Back in the dark days of March and April, the UK supply chain seemed to be collapsing into chaos. At least, that was the message from the media, with stories of supermarkets stripped bare, and distributors hard pressed to meet demand. However, double-headed intermodal trains, loaded to capacity, played a huge roll in delivering boxes full of everything from ports and distribution centres. Britain was fed and fuelled once again.

Britain’s supply chain depends heavily on intermodal, and Britain’s rail freight is heavily dependant on intermodal movements. According to the Office of National Statistics, 42 per cent of UK freight movements are domestic intermodal. Fortunately, the insular nature of the UK market worked in favour of the supply chain. The domestic imbalance unwound over the course of six weeks, and even where more containers went out, they were never more than a twenty-four hour trip away from return to base. It is proving significantly more complicated on the international scene.

Exact figures for the number of containers is hard to calculate. No one agency nor international agreement exists for the counting of boxes in transit. However, according to English container trading company Billie Box, there are around 20 million containers in the world, but only about a third of them are actively registered and in transit, trading around the world. That said, those busy boxes are each making about 25 journeys a year.

Major international ports have been experiencing build ups or shortages, as industrial outputs and trading volumes have varied wildly from the norm. That is a big headache for the major container ports of the world.

Top twenty ports by size include Shanghai, Singapore, and Hong Kong in Asia; Los Angeles – Long Beach in the USA, and Dubai in the Middle East. All these are relevant for Europe, as their major trading partners include Rotterdam, Antwerp and Hamburg, and ports do not respond well to uneven trade flows. All three ports depend on rail forwarding, as does Felixstowe in the UK – a not insignificant player on the world stage, busier than Seattle, or any ports in Spain, France or Canada.

The operators of Hamburg, the third largest container port in Europe, announced only a few days ago that they are radically improving their handling protocols – not just to deal with spikes in demand, but also to cope with expansion plans.

No difficulties on the UK rails

At present, UK rail freight operators are not reporting difficulties. Any problems are being absorbed further up the logistics chain. However, with the bulk of UK trade as dependent as ever on maritime traffic, the disruption at sea is an issue for concern. The scale of container ships, delivering TEU by the thousand, is something that is planned months, sometimes years, in advance.

Shipping specialists estimate that the waves created by the worldwide pandemic measures will take not six weeks, but at least six months to unwind. Those waves have yet to reach the UK shores.

Domestically, industry concerns are that the industry will change long term. Insiders say that demand for basic supplies will remain stable – although long term modal shift should encourage growth in that market.

Worries are expressed over industrial output, and consequent export shipping. Port operators worry that export flows are being buoyed up by pre-covid orders, and that new business is not coming through. If Britain continues to import on the same pattern as at present, but exports fall, rail freight operators will be conveying many empty containers to UK ports in the future, but that future will be short-lived.

Consignments all at sea

The scale of container traffic may yet be the answer to any domestic concerns. Those wondering where their consignment has gone, when that intermodal passes with an empty Ecofret in the consist, need only consider the numbers.

Of all those containers on all those 5000-plus container ships, around 190 get lost at sea. That is two and a half train-loads, to use that overworked rule of thumb. What may be alarming is that the overboard figure quoted is … a daily count.

Rail freight operators are keen to point out that the number of containers lost overboard from trains, worldwide, on a daily basis, hovers around … nil. All the tracking technology in the world does not make recovery from the bottom of the sea any easier.