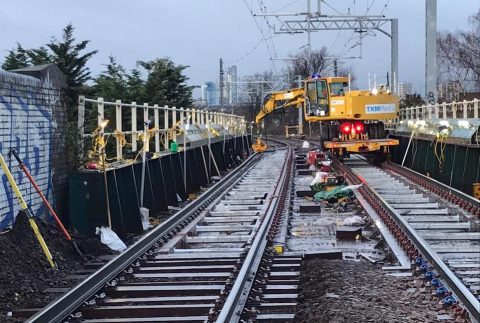 Rail industry left out of UK chancellor’s plan for jobs

After last week’s announcement by UK Prime Minister Boris Johnson, in which he committed to ‘build, build, build’, the rail industry was hoping for some detail in today’s statement from UK chancellor Rishi Sunak. However, the ‘Plan for Jobs’ did not directly offer anything specific in the strategy for economic recovery, says one representative body. There was no direct mention of the rail industry in today’s speech.

The chancellor did reveal several job retention initiatives, that can indirectly assist the rail industry – particularly the hard-hit passenger sector. However, the representative body – the Railway Industry Association – felt there could be more done to generate growth, and in turn help grow the freight sector which has worked harder than ever during the coronavirus crisis, and has potential to support the recovery of the entire national economy.

Darren Caplan, the RIA chief executive, would like to have seen concrete plans announced.“Although today’s plan set out a strong strategy for job retention”, he said, “Many in the railway industry will be disappointed that Chancellor Rishi Sunak didn’t mention anything about new rail infrastructure in his speech.

“The Government has said it is seeking to ‘build build build’ and has recently spoken of an ‘infrastructure revolution’, calling publicly for shovel-ready projects to help reboot a green economy post-coronavirus. Yet, we are concerned that no accelerated rail infrastructure projects were mentioned today, such as those in the Government’s own list of 58 rail enhancement schemes directly within its power to speed up.”

There was not much solace for the Rail Freight Group, which represents operators and stakeholders in the sector. “‘We welcome the announcements to support job creation and training, as well as to reward those employers who furloughed staff rather than laying them off”, said Joe O’Donnell, Head of Policy at the RFG.

O’Donnell added that the industry felt this was a chance to address issues in the economy that the chancellor had failed to recognise. “In terms of supporting a ‘green recovery’ this is a missed opportunity for the UK and for rail freight”, he said. “While measures to improve the energy efficiency of homes are needed, it was disappointing that the speech did not mention rail. Transport is the sector of the economy with the highest carbon emissions but was only mentioned in the context of better roads. Significant investment in rail to encourage modal shift of freight from road to rail would both reduce carbon emissions by around 76 per cent and create skilled jobs. We urge the Government to make such a commitment in its forthcoming Transport Decarbonisation Plan.”

The argument from the RIA concentrates on looking at how capacity and loading gauge enhancements would release the potential for rail to stimulate the economy, Their chief executive referred to the RIA’s own research which shows sustained growth in the rail freight sector, accelerated by factors including modal shift and climate change legislation.

“The Chancellor specifically unveiled a “Plan for Jobs” – yet in the current circumstances few sectors can generate jobs and GVA [gross value added] as quickly as rail”, said Caplan. “UK rail has kept going throughout lockdown, enabled key workers to get to workplaces, and has shown it can continue to safely maintain and build track and train – even in difficult lockdown conditions – essential to the UK’s connectivity and levelling-up agenda. So whilst we and rail supply businesses will welcome the Chancellor’s job retention measures, we will continue to campaign for the Treasury to ‘Speed Up Rail Enhancements’, benefiting not just the railway industry, but also UK plc, its communities and long-term connectivity in the difficult months ahead.”