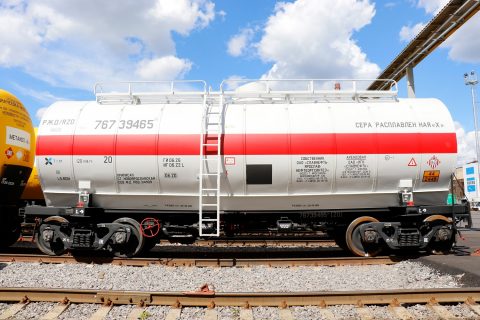 Russian rail freight manufacturer United Wagon Company and Slavneft-YANOS, one of Russia’s biggest oil refineries have signed a contract for the supply of tank cars. The wagons will be used for molten sulfur mounted on 25 tonne axle load bogies. The delivery is scheduled for late October 2020.

The 15-6913 tank car is designed to transport molten sulfur and other chemicals. The tank volume increased to 44 m3 and load capacity increased to 72 tonnes, compared with standard cars on 18-100 and similar bogie models. Such gain in payload results in up to 10 per cent of savings on the rolling stock needed for shipment, explained United Wagon Company (UWC).

The 15-6913 car’s tank is made of stainless steel resistant to aggressive cargoes. The tank designers used thermal insulation with double casing forming an air gap or clearance to ensure the uniform heating of transported cargo with hot air. The air in the gap is heated by means of tubular heating elements (THEs) under the tank. The sections are installed on the tank’s frame along with a control panel, power outlets and a fuse panel. The degree of cargo heating is monitored through a thermal sensor placed on the tank shell.

The tank car 15-6913 is outfitted with 18-9855 bogies having a 25 t axle load. The latter enabled to increase maintenance intervals up to 1 million km (or 8 years) and to notably slash the car lifecycle (32 years) expenditures. For comparison, the standard tank car for molten sulfur undergoes the first routine repair after it runs 210,000 km (or in 3 years) and the follow-up depot repair after running another 110,000 km (or in 2 years).

UWC has been collaborating with Slavneft-YANOS since 2017. It has already supplied 39 Tikhvin-produced tank cars to the oil refinery to carry commercial-grade sulfuric acid and molten sulfur.