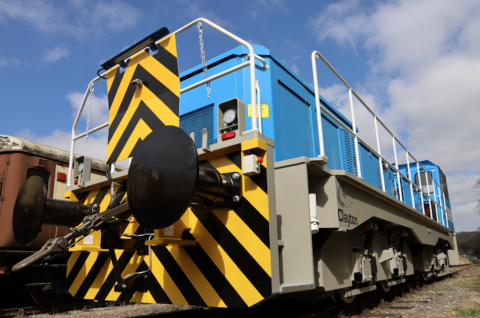 A name very much from the British engineering past shunts firmly into the future with a deal to supply hybrid motive power for multinational leasing company. Clayton Equipment, the only British independent heavy locomotive manufacturer, has agreed a contract with Beacon Rail Leasing for the supply of fifteen of its CBD90 hybrid locomotives, along with options for a period of three years.

The distinctive locomotives are a popular and hard-to-get piece of modern kit. Clayton says the deal with Beacon will let UK customers get their hands on the CBD90, realising commercial benefits from reduced costs and lead time.

In one form or another, Clayton has been around for the best part of a century, but the CBD90 represents the very latest from the Burton-on-Trent manufacturer. At 90 tonnes, it is a heavy-weight addition to the fleet, and the largest locomotive built in the UK in over 20 years.

The unit is self-contained, with onboard battery charging from a low emission, EU Stage V compliant diesel engine, or, as Clayton says, “from a three-phase supply, providing 100 per cent emission free solutions.”

“This unique agreement is a significant milestone in the company’s history and provides a major growth opportunity for Clayton Equipment”, said Clive Hannaford, managing director at Clayton. “Beacon has extensive rail asset expertise which will help ensure the two companies maximise the potential to supply our customer base with sustainable, low emission, environmentally compliant equipment.”

The deal comes at a time when demand is significant for alternative fuelled shunting capability. Currently under construction in Scotland, the Mossend International Railfreight Park will be served by a compliment of battery-powered shunters, supplied by Clayton.

Sources close to both that project and the manufacturer told RailFreight.com that demand had “gone through the roof”, especially since the UK government and the devolved administration in Scotland had set challenging targets for rendering the economy carbon-neutral. Unconfirmed claims say the order book has gone from an on demand basis to a three year waiting list, almost overnight.

Clayton has a long history of involvement with the UK rail industry. That relationship goes right back to the 1960s, when Clayton was a major player in the transition from steam to diesel power on the network. Their distinctive class 17 locomotives were a common sight in the north of England and in the Scottish Borders.

Just as distinctive, but much more technologically advanced, the CBD90 could well be just as common a sight. Adam Cunliffe, CEO of Beacon, said they were working in a fast-changing environment. “The increased demand for lower emissions, new technology, more capacity and cost-effective assets, Beacon is pleased to be able to form this new partnership with Clayton Equipment which will serve to meet this demand.”

The multinational Beacon Rail Leasing has a current portfolio of 346 locomotives, 1000 freight wagons, and 575 passenger train vehicles and intercity coaches on lease across Europe. Nothing on the books though is quite as venerable as a shunter that is being resurrected by a smaller, newer, UK firm. There is new life promised for a design that pre-dates even Clayton itself.

If a brand new loco is beyond budget, maybe this recondition classic could fit the bill.

Meteor Power, better know for electric motorbikes that would not look out of place in a Tom Cruise movie, are currently working on a conversion that has been over sixty years in the making. The once ubiquitous shunter, the con-rod coupled 0-6-0 “class 08”, owes its design to the days of Art Deco. Even so, some of the over 1000 derivatives are still in service today. One is being converted to battery-diesel operation, incorporating technology from Tesla – the founder of which was not born when the first “08” rolled out – and neither were his parents.

It’s a far cry from pioneering, low power diesel units. The only class 17 Claytons still rolling are on model railways. Yet, while they may be small, and a little lacking in power, they are almost maintenance free and reliable – and fully battery powered – just like their new big brothers.