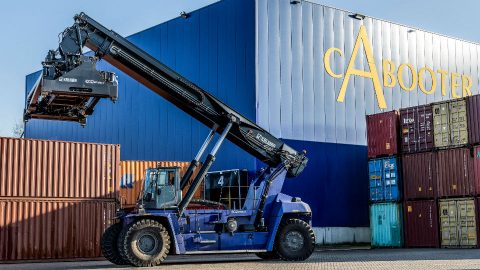 Dutch terminal operator Cabooter Group has purchased a fully electric reachstacker manufactured by Kalmar. The group will deploy the crane at its terminal in Kaldenkirchen, just over the border with Germany and part of the logistics hub of Venlo. The crane will start to be used in 2021. According to Kalmar, it will be the first customer to take a fully electric version of the Kalmar Reachstacker into use.

The Kalmar Electric Reachstacker will be powered by advanced lithium-ion battery technology. It has already been scheduled for trial at the logistics hub, which stretches from the German terminal to Venlo in the south of the Netherlands. It will be an addition to five Kalmar Eco Reachstackers already in use in the terminals.

Hans Cabooter, President, Cabooter Group: “The main driver behind our decision to adopt the Kalmar Electric Reachstacker solution is the need to reduce the noise and airborne emissions that our equipment generates. This is especially important at our Kaldenkirchen terminal because it is in the centre of the city, where there are clearly defined limits for these emissions. Our goal is to become the industry leader in emission reduction in partnership with Kalmar.”

Kalmar, part of Cargotec, is on a journey to offer an electric version of every product in its portfolio by 2021. It has already launched fully electric versions of its empty container handler, Ottawa terminal tractor, light and medium forklifts, shuttle and straddle carriers, automated guided vehicles (AGVs) and yard cranes. The electric offering is designed to help customers reduce overall fuel costs and comply with increasingly strict airborne and noise emissions standards without compromising on performance, the manufacturer explained.