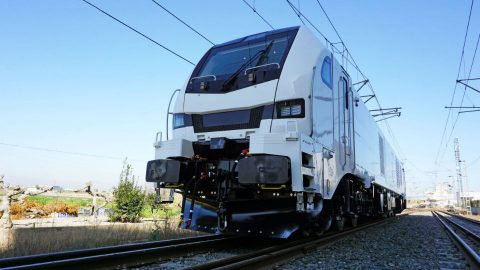 Stadler has signed a contract with the European Loc Pool (ELP) for ten additional six-axle locomotives. This purchase is part of the framework agreement with the leasing company for a total of 100 locomotives, announced on 20 May 2019. ELP is Stadler’s first customer for this type of locomotive.

The electric locomotives will be in multi-system configuration and have a power of 9 MW. The Co’Co’ locomotives are fully TSI-compliant. According to Stadler, the order of a TSI-compliant 9 MW power locomotive is a landmark event in the European market.

The six-axle locomotives have been ordered in multi-system configuration for Germany, Austria, Switzerland and Italy. If required, they can be equipped with one or two additional 900 kW diesel engines, and all of them have ETCS and radio remote control as standard features. Thanks to a Co’Co’ axle configuration and output range of 9 MW, ELP locomotives are characterised by outstanding tractive effort.

On many EU freight corridors, a single Co’Co’-hybrid locomotive can replace two Bo’Bo’ locomotives for the same train weight. This will substantially reduce the cost base for freight rail operators and minimise wear and tear to the track infrastructure. Sophisticated bogie technology will cut track access costs.

Together with the hybrid locomotives on order, the ELP fleet now comprises 30 locomotives, which all meet the latest technological requirements and can be used on both electrified and non-electrified tracks. When they are moving, they are able to switch from the electric traction to diesel traction, in hybrid configuration.