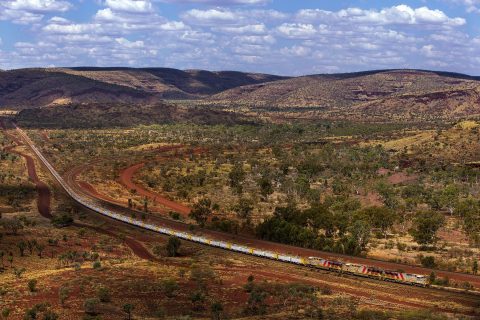 Rio Tinto has achieved a significant milestone with the first delivery of iron ore by an autonomous train in Pilbara, Western Australia. The self-driving freight train travelled over 280 kilometres from Rio Tinto’s mining operations in Tom Price to the port of Cape Lambert on 10 July. The company plans to start full operations of the autonomous journey by the end of 2018.

According to Rio Tinto, the programme will deliver the world’s first fully autonomous, long-distance, heavy-haul rail network, operating the world’s largest and longest robots. The concept is named AutoHaul. The inaugural journey was a significant milestone for the programme and follows regulatory approval in May. The company said it is on schedule to complete by the end of the year.

The freight train consisted of three locomotives and carried around 28,000 tonnes of iron ore. It was monitored remotely by operators from Rio Tinto’s Operations Centre in Perth more than 1,500 kilometres away. “The safe first delivery of iron ore by an autonomous train is a key milestone for AutoHaul”, said Rio Tinto Iron Ore managing director Rail, Port & Core Services Ivan Vella. “This programme symbolises both the pioneering spirit and innovative talents of many people across Rio Tinto and shows our absolute commitment to improving safety and productivity, as well as enabling greater flexibility across our operations.”

The first driverless freight train of Rio Tinto moved between mines and port in 2014. In the year after, the first locomotives entered the railway to test onboard systems, signaling and security systems and communication with the Operations Centre in Perth. In July 2017 the mining company operated autonomous trains on twenty per cent of its network, however, a driver was on board at all times to monitor the operation. The autonomous operation is set to unlock significant safety and productivity gains for the business, as well as optimise the company’s iron ore system by providing more flexibility and reducing bottlenecks.