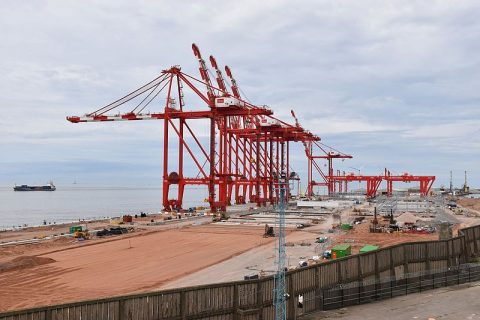 Published on 09-05-2018 at 11:12
Port of Liverpool is developing its intermodal handling capacityPeel Ports

A new rail freight service between the Port of Liverpool and Mossend near Glasgow was opened on 8 May. The service provides for a new link to the deep-sea port for Scottish exporters, enabling them to export their products destined for global markets more competitively.

The service was realised thanks to a partnership between Peel Ports and rail freight company DB Cargo. Metro Mayor Steve Rotheram officially launched the departure of the inaugural journey on Tuesday, which saw goods loaded in Liverpool and transferred to Mossend terminal in Glasgow.

The train comprises of up to thirty wagons and is expected to carry over forty containers per trip. The service will initially run on three days a week. Apart from providing a welcome rail link to the north, the freight line also opens up congestion around the Port of Liverpool, a popular destination for truckers.

Jouke Schaap, Container Director at Peel Ports, said: “This is an important milestone event for us and our partners, DB Cargo. We know that cargo owners are looking for more efficient ways of getting their goods from A to B, and this rail freight service provides them with a simpler, more cost effective and environmentally friendly way of doing that.

“The rai freight service opens up global markets for thousands of Scottish exporters, looking to transport their goods around the world”, added Schaap. Scottish family-run company Walkers Shortbread will be one of the first customers to use the new rail freight service, exporting 700 containers a year to America. Kinross-shire based Cygnet PG, the largest potato producer in the UK, has also committed to the new service.

Andrew Stokes, Head of International Sales at Walkers Shortbread Ltd, said: “The new rail service connecting Scotland with Liverpool provides us with direct, regular access to our gateway to America. We are currently exporting around 700 containers of shortbread to the US each year, and hope to see this grow in years to come, in part thanks to the integrated route to the market offered via Liverpool.”

“This new service is a major boost to Scottish exporters, underpinning Scotland’s manufacturing base, particularly across the food and drink sectors. Via the Mossend rail terminal, Scottish goods will get to global markets faster, cheaper and with a major reduction in environmental impact”, added Andrew Hemphill, Port Director for Clydeport.

The move echoes Peel Ports Group’s longstanding commitment to reducing road haulage miles locally around the Port of Liverpool. The port authority launched a rail route between Liverpool and Drax Power Station in 2015, shipping biomass pellets to the site in North Yorkshire.

The available train path capacity directly to and from the Port of Liverpool is currently amongst the highest of all major ports within the UK. For intermodal traffic, the port has W10 gauge clearance capability, allowing 9ft 6in containers to be conveyed on standard deck height rail wagons. The new rail service will complement Liverpool’s wider logistics offering, such as multi-user warehousing.

In Mossend, a new rail cargo hub is currently in the pipeline. The Mossend International Railfreight Park (MIRP) is an expansion of the existing site, which will create a modern and strategic rail facility in central Scotland. With an expanded railhead, including 775 metre-long sidings capable of handling the longer cargo trains, and 200,000 square feet of onsite storage, distribution and logistics facilities, MIRP marks a major investment in both North Lanarkshire and Scotland’s economy. Scotland wants to invest heavily in improving its rail network and services to meet future demand.