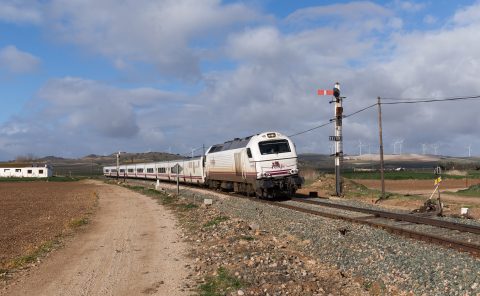 Antequera to have biggest multimodal centre south of Spain

Antequera will have the biggest multimodal centre in the south of Spain with the completion of the Dry Port of Antequera in 2020. Situated in the province of Malaga (Andalusia), this projected logistics area is connected with the Mediterranean and the Atlantic rail corridors, and its objective is being a rail freight bypass for the ports of Cadiz, Algeciras, Malaga and Seville ports.

The Dry Port of Antequerra will have 200,000 square metre in warehouses, receiving and distributing goods from several Andalusian ports and airports (Seville and Malaga) via rail, because it is a central point between the southern parts of the Mediterranean and the Atlantic rail freight corridors. It is set to become a logistics hub for companies such as Mercadona, the most important Spanish supermarket, and Amazon.

Construction will be carried out by the Andalusian regional government and the private
intermodal freight company Acotral, whose biggest client is Mercadona. The warehouses will either be sold or rented by real estate company CBRE. The Dry Port of Antequera was designed in 2000s, but its construction was delayed due to the economic crisis.

Andalusia is the largest Spanish exporting region due to its agricultural activity and grocery industry, which propelled the regional economy after the real state crisis in the area, one of the poorest in Spain. The region suffered a hard economic blow when it became evident that real estate was not a sufficient replacement of its manufacturing sector (chemistry, mining and automotive), which disappeared in the 1990s, mainly after the Spanish depression (2008-2014).

The agricultural and grocery industries have led the exports since 2007, propelling the
economic growth in the rural areas, which account for 30 per cent of the population. It is these industries that should strengthen the rail freight connections with Central Europe to secure their competitiveness.