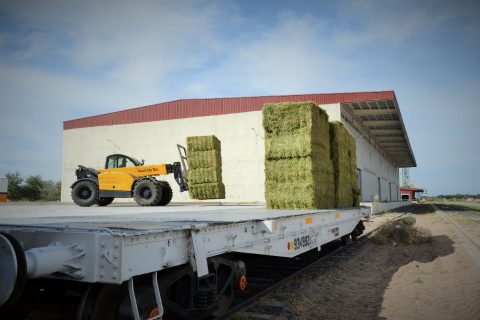 A new rail freight service was launched between the Argentinian town of Villa Mercedes, in the province of San Luis, and the Port of Bahia Blanca, on the Atlantic Ocean. The sole purpose of the line is to facilitate the export of animal feed to Saudi Arabia, an important trade partner for San Luis.

The line is used by the Argentinian company Ster Beef, which exports its product to Saudi Arabia through the Port of Bahia Blanca. This country imports huge amounts of alfalfa because it cannot produce natural grass for its cattle due to its water scarcity.

The first train, which departed last month, carried 18 wagons of alfalfa, covering 700 kilometres. The new rail freight service returned to San Luis with empty wagons. Diego Pajaro, development manager of the Logistic Area of San Luis noted: “We must try hard to fill the train to San Luis in order to optimise the logistic cost.”

San Luis is an inland and unpopulated province where agriculture is the main economic engine. Its government has been working for many decades to develop transport projects to export its products through the Atlantic ports. However, the business is only developing slowly. San Luis has carried out several civil works in the last few years to repair its rail network and upgrade Villa Mercedes station, having invested around 21,8 million Euros.

It has also negotiated a price reduction for services of several rail freight companies such as Ferro Expreso Pampeano and Belgrano Cargas. Currently, it is looking into an option to combine trains with products from San Luis, Patagonia and Pampa provinces to increase rain traffics to Bahia Blanca.