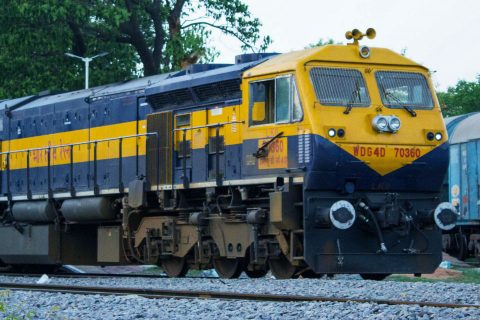 The Diesel Locomotive Works (DLW), a production unit of Indian Railways, has converted two diesel locomotives into one electric locomotive. According to the company it is the first time a conversion of this kind is carried out successfully.

A team of engineers started the project on 22 December last year and presented the new locomotive on 28 February. Currently, it is being tested for safety and further improvement, the company was cited explaining in the Times of India.

The wagons converted are 12-axle WAGC3 locomotives, rated at 5 000 hp for each unit. Permanently paired, they form one single 10,000 hp locomotive, a revolutionary achievement considering the original WDG3A diesel-electric freight locomotive is rated at to 2 600 hp.

The diesel locomotives were due for mid-life rehabilitation. The frames, bogies and traction motors were retained, and combined with the sidewalls and roof from a withdrawn WAM4 electric locomotive. The electrical systems are based on a WAG7 electric locomotive, while the original Alco diesel engine has been discarded.

The work was carried out by a team of engineers from Research Designs and Standards Organisation (RDSO), Chiitaranjan Locomotive Works (CLW), DLW and Bharat Heavy Electricals Ltd.

If the conversion proves successful, more diesel locomotives could be re-built instead of undergoing mid-life overhauls, the company said. Indian Railways aims to expand its electric fleet in response to the national roll-out of the electrification infrastructure.