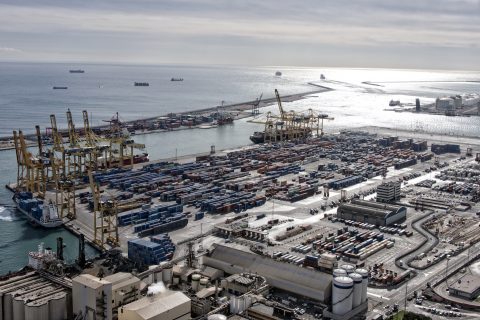 Published on 13-02-2018 at 08:45
View of the container terminal of the city's harbor in Barcelona, Spain, 29 January 2014. Barcelona hosts Europe's ninth largest container port. (Photo by Horacio Villalobos/Corbis via Getty Images)

A record amount of rail traffic helped the Port of Barcelona deliver its best-ever freight results in 2017, and confirmed its status as one of Europe’s fastest-growing ports.

Official figures from the port authority management show the port registered 243,585 TEUs of rail traffic – containers which arrived or left the port by train – last year. This represents an eight per cent year-on-year increase.

It also puts the overall railway modal split for the port at 13 per cent. In 2017 the Port of Barcelona recorded its best results yet in the main traffic indicators, as total traffic (including all cargo modes) surpassed 61 million tonnes for the first time. That is a year-on-year increase of 26 per cent.

This result contributed significantly to the excellent behaviour of container traffic, one of the most strategic segments of activity for the port and also a more representative marker of the surrounding economy. In total, 2,968,757 TEUs were moved in 2017, representing an increase of 32.3 per cent.

China continues to be the Port of Barcelona’s prime trading partner, both in terms of imports (44.3 per cent of foreign trade containers unloaded in the Catalan facility come from there), and exports (it receives 11.6 per cent of the containers leaving the port). The remaining trading partners and the type of products transported are highly diverse.

Barcelona is becoming an increasingly attractive destination for freight shippers keen to make use of its growing rail freight infrastructure. Only last month it was identified by Euro Cargo Rail (ECR), the French subsidiary of DB Cargo, as the key hub of one of ECR’s new Mediterranée corridor, linking trains between south-eastern France, Italy, the Mediterranean and Spain.

There are also hopes it could soon become part of a refrigerated rail service route launched in January between the Port of Valencia and Rotterdam. Shipping firm Cool Rail has said that Barcelona may be served in the future, if the Valencia service demonstrates there is sufficient demand for a stopover in the Catalan capital.