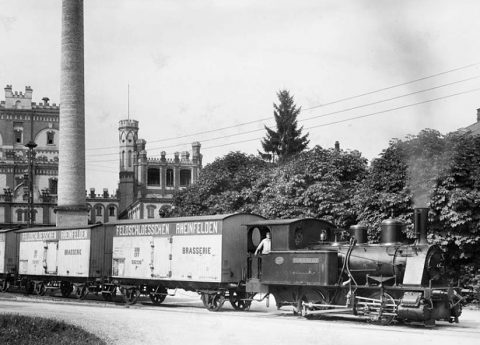 SBB Cargo has renewed a remarkable 150-year agreement with Switzerland’s largest brewery Feldschlösschen to carry its beer shipments until 2021 and possibly beyond.

Feldschlösschen Getränke AG, which produces numerous beers, sweet drinks and mineral waters, has been working with SBB since 1876, when steam was still very much king of the railways.

The first beer deliveries from Feldschlösschen’s brewing centre at Rheinfelden were only delivered by rail locally, and that was how it stayed until 1889 when distribution was widened thanks to an extension of the Swiss railway network. Fast forward 100 years, and with the days of steam passing into history, the diesel-powerered engines took over the Feldschlösschen rail deliveries in 1990.

Today SBB Cargo transports around 5,000 wagons a year from Rheinfelden, supplying regional warehouses and distribution centres across Switzerland. SBB also transports mineral water, which is produced and filled by Feldschlössen in its own spring in Rhäzuns, from Landquart. The new agreement is from 2018 to 2021, with the option for an extra year.

SBB Cargo says that only by adapting to changing market demands in delivering beer to the customers’ needs will rail cargo secure its future. Faster and more flexible transports, it says, are increasingly being demanded by the customer, bringing added cost pressures. Daniel Bürgy, Head of Sales for SBB Cargo, said: “We are pleased to continue the 140-year partnership and to be available to Feldschlösschen as a reliable, environmentally friendly transport partner.”