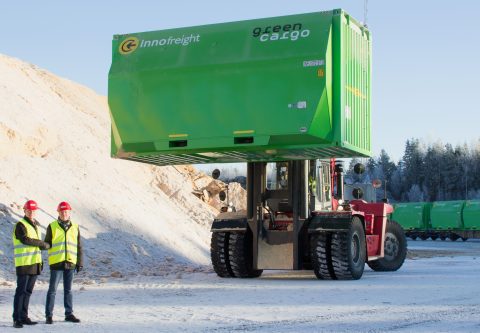 Eight years since after first delivering wood chips to Söderenergi’s fuel terminal in Nykvarn, Green Cargo says the new containers will mean they will be cutting the number of trains but not losing any volumes transported.

This is possible because Söderenergi uses an increasing amount of refuse-derived fuel, which is lighter than wood-based fuel, which weighs more per cubic meter. Johan Lorensson, Sales Executive at Green Cargo, said: “We continuously developed the transport solution throughout the agreement period, and we are now upgrading the entire system to improve volume capacity. It’s a question of increasing and adapting capacity as optimally as possible for Söderenergi.

“A container upgrade gives us better matching between the total weight and the total volume we are transporting by this system. We have chosen to continue using load carriers from Innofreight, and are replacing the system’s containers with the larger XXXL model.”

Based in Sweden but with operations across Europe, Green Cargo’s deliveries of wood-based and refuse-derived fuel will this year come from places like Töva, Östavall, Ånge, Bastuträsk and Örnsköldsvik. Deliveries are transported to Nykvarn on a predetermined timetable, and trains will comprise double locomotives and 27 wagons with 81 XXXL containers, which is around 1,600 net tonnes of fuel per train. The train’s load volume will increase to about 4,500 m3.

Olle Ankarling, Head of Logistics at Söderenergi, said: “For Söderenergi, this is a step further in the right direction, toward increased sustainability. With larger containers, we’ll be more flexible, reduce the number of trains by 25 per cent, and be more cost-effective. This means we’ll also promote traffic reduction on an already heavily burdened rail network, freeing up track capacity for other traffic. We handle a total of 900,000 tonnes of fuel, equivalent to 3 TWh (TeraWatt hours) per year, and we are investing great effort into making all modes of transportation efficient and sustainable.”

Johan Lorensson of Green Cargo, added: “Together with Söderenergi, we have continuously developed the transport systems during the agreement period in order to attain punctual deliveries with minimal disruptions. We have eliminated tractive power limitations, and with the XXXL containers we are maximizing volume capacity. We complement each other with long-term planning and long-term perspectives.”