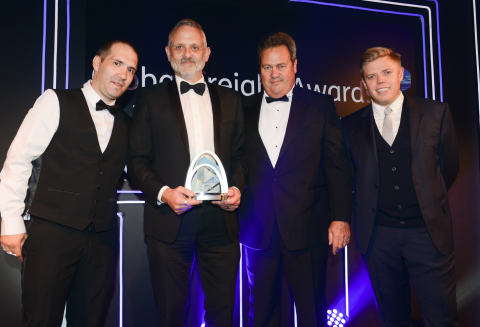 A collaboration between Freightliner UK and drinks logistics specialist Trans Ocean to transport wine in recyclable containers has been commended at the 2017 Global Freight Awards, which recognise the very best of the freight and logistics sector.

Freightliner and Trans Ocean, the bulk liquid division of JF Hillebrand, received the coveted Environmental Award for their bulk wine recycling initiative. Since 2010 the two companies have been working together, and this particular project has seen more than 70 per cent of wine imported by Trans Ocean from countries including South Africa, Chile, New Zealand, Australia and North and South America moved inland by Freightliner for delivery to final destinations across the UK.

Trans Ocean transports the wine in Flexitanks made from fully recyclable polyethylene material inside containers which are transported to all the major bottling plants across the UK every week. The rail transports have removed around 4.8 million lorry miles a year from the road.

Joanne Turner, Commercial Director of Freightliner, said: “The environmental benefits of moving freight by rail are well known, cutting CO2 emissions by 76 per cent per tonne, reducing air pollution and easing congestion on our busy roads. This, combined with our joint recycling initiative, puts Freightliner and Trans Ocean at the forefront of environmental innovation.”

The recycling operations at Freightliner’s Bristol and Garston terminals see all of the bulk wine Flexitanks recycled and 95 per cent of the bulk heads which keep the Flexitanks in place in the containers, refurbished and reused. Wine residue is also captured, measured and recycled into the agricultural industry. In response to export demands, Freightliner, which is a subsidiary of a subsidiary of Genesee and Wyoming Inc. (G&W), is now fitting Flexitanks for other non-hazardous bulk liquids including beverages and edible and non-edible oils on behalf of Trans Ocean.

Marc Graham, Branch Manager UK for Trans Ocean, added: “We are committed to minimising the environmental impact of our Flexitanks at every stage of the product lifecycle – from the design and manufacture, through the transportation and then finally to recovery and recycling. This initiative has enabled us to recycle 900 tonnes of plastic in the past year alone.”