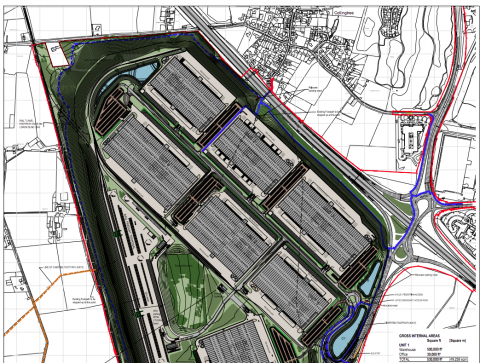 Councillors in the UK county of Northamptonshire will this week scrutinise plans for a major new rail freight facility that supporters say could create 7,500 jobs and provide a vital new outlet for the country’s rail cargo network.

Proposed by developers Roxhill, the Northampton Gateway Strategic Rail Freight Interchange would cover an area of 116 acres (468,000 square feet), and have rail sidings to serve warehouses, along with container storage and lorry parking. Initially handling no more than three or four trains a day, Roxhill envisages that in the long term, the site will have the capacity to handle up to 16 trains daily. It could also incorporate an ‘express freight’ facility for handling smaller parcels for retailers.

A report sent to Northampton Borough Council has recommended that councillors support the scheme. However as the proposed site is on the border of the north and south districts of Northamptonshire, it is also due to be examined by South Northamptonshire Council on November 30. This follows a statutory consultation period. In line with national government policy, the scheme will then be submitted to the Planning Inspectorate early next year before a decision is taken by the Secretary of State for Transport.

Roxhill says the site, close to the M1 motorway, is located in a ‘golden triangle’ for logistics and distribution and therefore in a ‘strategically significant location’, for which there is considerable market demand and interest in national distribution activity. “The terminal is being designed to be able to meet a range of requirements of the rail freight sector, including containerised freight to and from ports, as well as other sectors within the UK,” adds the company.

“The proposals also make provision for an ‘express freight’ facility within the terminal in response to signs that this is expected to be an area of future growth in the rail freight sector geared around the increasing demands for express parcel distribution by the retail and other sectors.”

Another of these constructions given planning permission only because the promise and advantages of a rail connection are extolled by the planners!Strangely after being built the rail traffic never materialises!