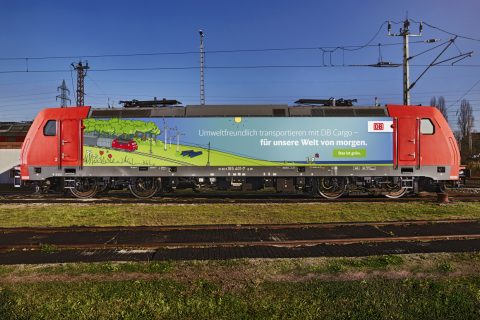 DB Cargo says it has increased its share of CO2-free rail freight transport by more than half in the past year, and plans to build on this in 2018. Deutsche Bahn’s dedicated rail cargo arm, which operates right across Europe, is aiming to cut specific greenhouse gas emissions by at least half by the year 2030 compared to 2006. Its flagship ‘green train’ is going out on tour as part of a novel new marketing strategy promoting rail freight’s sustainability credentials.

Up to 80 per cent less CO2 is emitted when transporting goods by rail, and DB customers in Germany and Austria can benefit even further through utilising the company’s fleet of ‘green trains’ – powered by renewable energy – known as the DBeco plus. In 2016 alone around 20,000 tonnes of CO2 were avoided compared to conventional rail transport – around the same amount of CO2 emitted by 5,000 households every year.

Since launching the DBeco plus in 2010, DB Cargo has saved the environment from over 100,000 tonnes of CO2, an amount which would require around eight million trees if it was being filtered from the air. Many DB Cargo customers have been relying on CO2-free rail transport for several years as a means of improving their own environmental performance and boosting their ‘green credentials’.

Audi, one of the world’s leading automotive manufacturers, has been using the DBeco plus trains since 2010 for transporting its cars from the Audi plant in Neckarsulm to Emden. Almost 1.6 million cars have, to date, been transported via this service, cutting some 63,000 tonnes of CO2 emissions.

Heiko Schultz, Head of Transport Logistics at Audi AG, said: “With this changeover, we are significantly reducing the CO2 emissions of our logistics operations and are making a sustainable contribution to climate protection.” Seven years after the start of the project, all Audi transport with DB Cargo to and from the two production plants in Germany is now CO2-free. This applies not only to the trains that leave the two German plants, but also all rail transport of goods arriving at the plants, including production components and materials from suppliers.”

An electrically-operated DB Cargo locomotive with a striking green design (pictured above) is not only intended to usher in the autumn, but will also be travelling through Germany from November as an ambassador for sustainable rail freight transport and the climate-friendly products of DB Cargo. The company has launched a photo contest that will reward anyone who photographs the locomotive on its travels with a small thank you. Photos should be emailed to umwelt-dbcargo@deutschebahn.com . The best pictures will be displayed on the DB Cargo website next year.