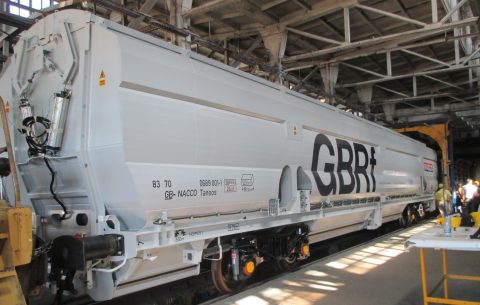 GB Railfreight is set to strengthen its fleet after announcing it is to lease 50 newly-built lidded biomass wagons from Nacco, offering a payload of 70 tonnes instead of the current lidded hopper capacity of 53 tonnes. The new auto-loading and discharing wagons will run in two sets of 24, delivering 1,680 tonnes of biomass per train, and will be delivered at the end of this month and in January next year.

It builds on the haulage contract signed earlier this year with Lynemouth Power Limited for a further 50 biomass hoppers to deliver coal services to the Lynemouth plant in north east England. Until then, the last coal train into the station had been in April 2015 when it was owned by RWEST.

John Smith, Managing Director of GBRf, said: “We are delighted to be able to make this investment following the start of our partnership with Lynemouth earlier this year. It demonstrates GBRf’s commitment to providing the best levels of customer service and the company’s desire to ensure the most efficient fleet of rolling stock is available.”This investment will also enable GBRf to carry more biomass to Lynemouth, reducing its carbon footprint and the emissions of the whole of the UK as well. This partnership is just one way in which GBRf, and the whole rail freight sector, is contributing to the UK hitting its climate change commitments.”

The company meanwhile has also commenced a year-long deal with UK aggregates and concrete firm J Clubb Ltd, which involves them transporting ash from Cottam Power Station in Nottinghamshire to the HH Celcon brickworks in Borough Green in Kent, in the south east. The ash is used in the manufacture of ‘aircrete’ blocks used in building and construction.

GBRf’s John Smith said: “This contract win is great news not just for GBRf but for both J Clubb and HH Celcon as well. It is a vote of confidence in GBRf and its ability to deliver a quality service for clients, as well as our aim to ensure as much freight in the UK is moved by rail as possible. We are delighted to be working with J Clubb on this, and hope that a long-term partnership develops in the coming months.”

Ed Surman, Production Director of HH Celcon, added: “I’ve just reviewed GBRf’s performance since it began the rail haulage service. The service has been first class, every train scheduled has run, it has never been short of a single wagon and the quantities/train have been on target. Thanks to all involved at GBRf in making this work, moving this business has been a revelation, wish we had done it sooner!”