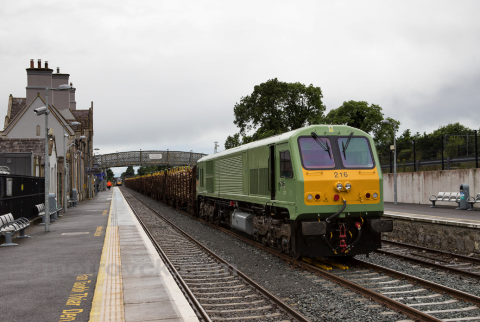 Soft drinks and medical supplies were among the diverse cargoes that helped rail freight traffic in Ireland increase significantly yet again in 2016, according to figures from national operator Irish Rail (IÉ) / Iarnród Éireann. A total of 101.5 million tonne kilometres of freight were moved by rail last year across the Republic, up five per cent on the previous year’s 96.4 million tonne kilometres, while the number of freight trains operated was up by six per cent on 2016.

The year also saw a six per cent rise in multimodal service trains for Dublin-based operators International Warehousing and Transport (IWT) and DFDS Logistics. IWT commenced rail operations in August 2008 with just two return trains a week from Dublin Port to Ballina in County Mayo, and now has up to seven return trains a week. The 2000th train was operated for the company by IÉ in August this year. Two return multimodal services per week are also operated for DFDS Logistics between Waterford Port and Ballina, with shipping connections to Europe via Rotterdam.

Multimodal traffic has been steadily increasing on IÉ now for several years with soft drinks and medical supplies for export being amongst the staple loadings. Rail routes from Dublin and Waterford ports are both cleared for conveying 9’6’’ hi-cube containers on standard platform wagons.

The number of bulk trains carrying pulpwood and zinc ore were also up by six per cent on 2015. Pulpwood trains are operated for Coillte from Waterford and Ballina to Waterford where the timber is used for the manufacture of building products, most of which are exported. The ore trains operate twice daily from Navan to Dublin Port from where the product is exported.

During 2016 IÉ successfully completed the trail run of a 54 TEU multimodal freight train, the longest ever freight train run in Ireland. Other initiatives during the year include ‘Rapid Rail’, a rail parcels service and also parcels collection lockers at principal stations on the network. The IÉ freight sector also operates ‘Navigator’, which specialises in the collection and distribution of automotive car parts. Navigator is amongst the best service of its kind in Europe with 99.6 per cent of all deliveries arriving on time throughout the Republic.