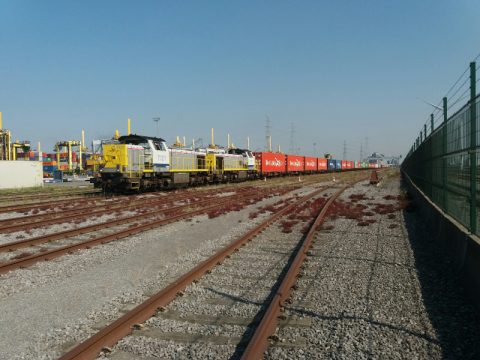 Belgian railway company Lineas witnessed an increase of 55 per cent in containers shipped through the country with the introduction of railway line LORO, connecting Antwerp’s east and west bank of the river Scheldt. The same railway line resulted in a surge in international freight operators on the Belgian railway network.

The railway connection was introduced in April last year, in response to heavy congestion on the road around Antwerp. Freight forwarders regularly faced congestion at the terminals, as well as on route to their destination. With the daily service, freight forwarders not only freed up space on these congested roads, but also became more likely to proceed their journey by rail, Lineas said.

In the first nine months of this year, 25,000 additional containers were moved via the Belgian railway network. Half of these trains continued their journey by rail to international destinations. While 25 per cent of all containers on the LORO-line headed towards the border at the beginning of this year, international container traffic now accounts for fifty per cent. Most international freight trains travel via the Green Xpress network to countries such as Ludwigshafen, Switzerland, Austria, Czech Republic and Sweden.

Sam Bruynseels, Managing Director at Lineas Intermodal said: “The LORO-line responds to a very topical demand of many forwarders. Rail provides a more reliable solution than road, especially on short distances. We see a lot of potential for this product, which has plenty capacity to respond to a growing demand. We are hoping to transport 35,000 containers this year.”