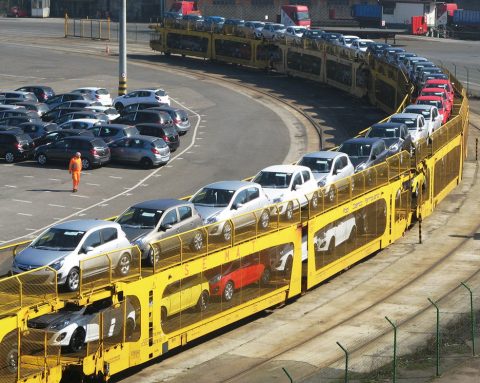 The Spanish Association of Car and Truck Manufacturers (ANFAC) has criticised the Spanish rail freight sector for its limited capacity to serve the car manufacturing industry. There is a lack of railway connections in most of Spanish ports and the average length of the trains is limited. The president of ANFAC, Antonio Cobo, has launched an official report to address the shortcomings.

ANFAC claims the situation is critical for factories that are located far from ports, such as Volkswagen in the region of Navarre, Opel in the region of Aragon and Nissan and Iveco and Renault in the region of Castile and Leon. “In some cases, vehicles must be transferred from trains to trucks covering a distance of 500 meters in order to reach a port”, the report reads. In addition, the average length of  Spanish rail freight trains is 450 meters compared to 750 meters of average length in Central Europe. In some cases, such as in Germany and France, freight trains are 850 meters long. Currently, Spanish national railway company Renfe is testing trains with a 600 meters length.

Spanish car factories produced 2.43 million vehicles in 2016, having exported 85 per cent to European countries. Spain is one the most important European hubs in the car manufacturing sector, having factories of Seat and Volkswagen (Volkswagen Group), Iveco (CNH Industrial Group), Nissan, Renault, Peugeot and Opel (PSA Peugeto Citröen Group) and Ford and Mercedes (Daimler AG Group). These factories played an important role in the recovery from the recent financial crisis, as they produce 1,9 million cars yearly and achieve good business figures.