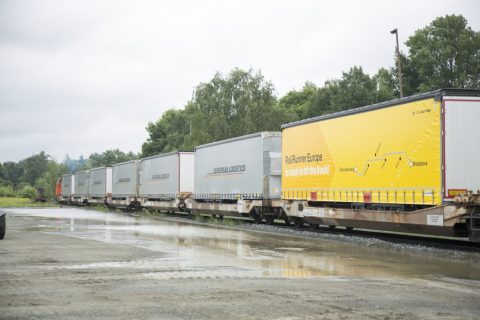 The European subsidiary of the American intermodal freight company RailRunner has started operations of its block train connection between the cities of Bratislava and Brunswick. In both directions, a train departed on Monday evening for its first 17-hour trip across Europe.

The connection operates on a daily basis, starting with pocket wagons and conventional craneable mega trailers, swap bodies and containers. Traction on the Czech route is provided by ČD Cargo while EGP (Eisenbahngesellschaft Potsdam) operates on the German route.

“In this respect, the volume will still move at a low level, especially in the start-up period. At first, it is important to ensure stability and performance of the train relation.”

Railrunner Europe was launched in 2015 with the aim to introduce its bimodal technology on the European market. This technology includes a mechanism of loading semitrailers onto innovative bogies without the need of a conventional terminal, a procedure it claims takes no longer than two minutes.

Awaiting approval to apply this technology on European railways, Railrunner Europe is expecting to replace its conventional technology on the Bratislava-Brunswick route in 2019. By that time, it is also hoping to manufacture rolling stock for its European operations mainly in Europe.