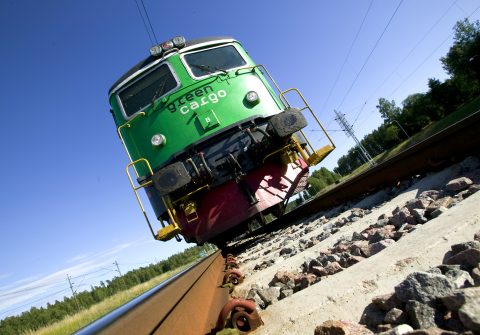 Nordic rail freight operator Green Cargo is toasting a double success after signing a deal with manufacturer Softronic for a pair of powerful Transmontana Co-Co locomotives, and renewing a domestic agreement with Real Rail Sweden.

With a tractive power of up to 3,000 tonnes, the Transmontano loco has twice the power of a conventional RC locomotive, and they are due to be delivered by the end of summer 2018. Owned by the Swedish state, Green Cargo operates extensively through Scandinavia, including large parts of Norway.

Jan Kilström, President of Green Cargo, said: “We have decided to evaluate a number of locomotives and wagons as part of our fleet strategy. First to be evaluated are two Transmontana Co-Co locomotives that will enable the creation of even more efficient logistics solutions, particularly for heavier traffic plans.”

Markus Gardbring, Assets Director of Green Cargo, added: “In addition to their superior tractive power, the locomotives are modern and are equipped with automatic and optimized electrical braking. These locomotives will be optimized to run as energy-efficiently as possible by using topography and route data.”

The company has also announced a renewal of an agreement with Real Rail Sweden AB for the transportation of perishable goods and industrial freight on three different routes between southern and northern Sweden. The companies first started working together last year on the Helsingborg-Nässjö-Umeå-Luleå & Gothenburg-Umeå-Luleå routes, operating three full trains five days a week.

High demand for the services have seen volumes climb steadily for the trains’ intermodal shuttles comprising mainly trailers and swap bodies. Real Rail, which is part of the Sandahl Group, operates the wagons and Green Cargo the traction. Hans Backman, CEO of Real Rail, said:  “We are continuing our partnership with Green Cargo who maintain high quality standards and have structured quality efforts in place.”