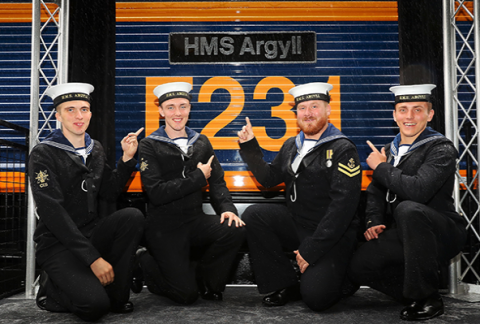 The Royal Navy has become the latest of the UK’s defence forces to have one of the UK’s biggest rail freight operators, GB Railfreight (GBRf), name one of its locomotives in its honour.

HMS Argyll, a type 23 frigate, was the name given to the Class 66 locomotive which has been repainted in a special livery and adorned with the ship’s crest. It marks the next step in a partnership between GBRf and the services which began with a trip to sea for affiliated organisations, as guests of the captain, to experience a day in the life of a warship and her crew.

John Smith, Managing Director, GB Railfreight, said: “We at GB Railfreight are deeply honoured that one of our engines will carry the name of Argyll, in recognition of the service our brave armed forces provide and the close working relationship between our two organisations.

“GBRf is also pleased to continue to draw inspiration from our serving men and women, such as those on-board HMS Argyll, replicating their hard work, culture of service towards a greater national good, and the development of our highly valued workforce through new skills and experiences. These values are at the core of our business too, and we know the Argyll class 66 engine will continue in this spirit.”

The renaming, which was unveiled at a ceremony at the naval base in Plymouth, rekindles a tradition from the railways’ 1900s heydays when it was common practice to name steam locomotives after notable Royal Navy warships. It came about after Bob Tiller, Engineering Director for GBRf, along with drivers Clive Coulis and Martin Clemis, was given the chance spend some time aboard the ship: “I was lucky enough to be on board HMS Argyll during some work up trials as a quest of Commander Shaughnessy as part of an affiliated group,” he said. “We sailed from Plymouth and undertook various exercises with the crew including live firing, damage-control, emergency fire and dummy man overboard retrieval.

“We were treated to such kindness and welcomed so much by her commander and crew that I asked the captain if I could name one of our GB Railfreight Locomotives after HMS Argyll in tribute to her crew. This I am pleased was warmly accepted. We were, to say the least, overwhelmed with how the crew of HMS Argyll and worked together as a team and we at GB Railfreight took back with us a lot of thought and inspiration,” added Clemis.

Commander Toby Shaughnessy, Captain of HMS Argyll, said: “The act of naming a locomotive after a warship is not a new one, but I don’t recall it being practised in modern times. I am very grateful to GB Railfreight for bestowing this honour upon HMS Argyll in recognition of the professionalism and dedication of my team and am very proud that our ship’s name will now be carried across the country.”

Big deal! How about the Royal Navy giving them freight to carry between their depots instead of sending it by road?