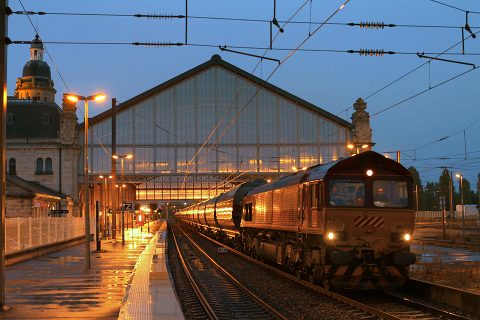 It follows negotiations between ECR and the unions which began in December last year. The company had proposed up to 300 redundancies as part of its strategy for achieving long-term sustainable growth in the domestic French market and along the key European freight corridors.

ECR’s strategy is based on three particular points: concentrating on France’s three dense traffic corridors, Mediterranean, Atlantic and North, to establish a ‘sustainable and profitable network’; improving customer service and efficiency of operations; and developing a staff culture based on excellence in customer service. ECR had originally proposed around 300 redundancies, but that number is now thought to be significantly fewer.

A further 100 staff have already been re-employed by external companies including West Rail and SNCF Mobilities. The latest development, says the company, marks a major point in the implementation of its strategy for ‘restoring and safeguarding’ the competitiveness of the company. Formed in January 2005, Euro Cargo Rail is the French subsidiary of DB Cargo, Europe’s largest rail freight provider.

Following the agreement to the latest plan by the unions, it was also formally approved by the local government office, the Regional Directorate for Enterprise, Competition, Consumer Affairs, Labour and Employment (DIRECCTE). ECR’s board also decided to implement a recapitalisation programme worth 150 million Euros. This, says ECR, will bring the financial resources needed for the continuation of it recovery and safeguard its competitiveness. After suffering losses of 25.5 million Euros last year, the company says it aims to return to ‘equilibrium’ by 2018.

Gottfried Eymer, Chairman and CEO of Euro Cargo Rail, said: “In a still very difficult global context for rail freight, ECR has managed to reach key milestones for its recovery in a timely manner. While much remains to be done, we know we can count on the support of our shareholders. In terms of production, our corridor strategy and stakeholder empowerment will enable us to increase the quality of our production. But rail freight will not survive without a clear support from the public authorities for the rail freight sector, a future for France, efficient for customers, freeing up road space and respecting the environment. It is in this path that leads to our recovery.”

Jurgen Wilder, Chairman and CEO of parent company DB Cargo, said: “We have full confidence in the potential of Euro Cargo Rail both to ensure internal traffic and the Group’s cross-border traffic. Recapitalisation, which is the highest in ECR’s history, confirms our support for our subsidiary to remain the leading private freight operator in the French market.”