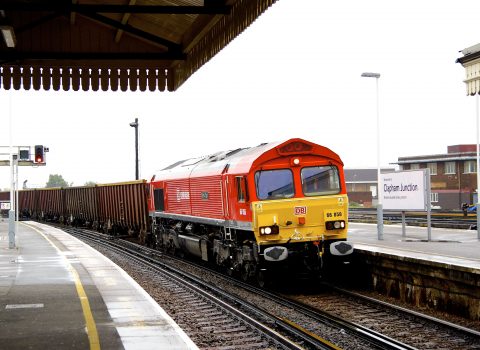 A union representing DB Cargo UK workers has issued a three-month ultimatum to the company to address ‘serious staffing gaps’ or face the prospect of a strike.

The Transport and Salaried Staff Association (TSSA) has temporarily stepped back from industrial action after DB withdrew what the union called ‘unacceptable’ flexibility clauses in new contracts of employment for staff. DB has also agreed to employ more staff and guarantee existing sick pay and ill health arrangements.

The dispute stems from a major restructuring programme first announced by DB Cargo UK last October, which includes making 893 staff, including nearly 400 drivers, redundant. The company confirmed the redundancies last month (May), but said it had reached an agreement with the main trade unions for a ‘future business model’ to officially begin on July 2.

That deadline came and went, with the TSSA strongly criticising DB for going ahead with the new working arrangements for retained staff as planned, and threatening to escalate both legal and industrial action. It demanded parity for workers with those of their counterparts in DB Cargo’s flagship Germany division, and said if necessary it would go to the German Parliament and ask Chancellor Angela Merkel to intervene. It also believes that in the long-term, the company should come under UK public ownership.

Fresh talks took place on July 5, and as a result the TSSA says it has given DB Cargo 12 weeks to introduce a new action plan to address the staffing gaps which remain, and rostering problems created by the redundancies. It also says DB has agreed not to ask staff to sign new contracts until the problems have been resolved. DB Cargo has responded by saying it has worked ‘incredibly hard’ to ensure a smooth transition. It acknowledged that a ‘small number’ of outstanding staff issues remained, but that it was maintaining an open dialogue with staff and unions in order to ‘work through’ the issue.

Steve Coe, Organising Director for the TSSA, said: “TSSA has secured guarantees from DB that will ensure all current and future employees maintain decent standards of employment protection rights going forward, and their right to belong to a union and have their rights to collective bargaining upheld. But we are far from satisfied. As we warned during the consultation talks, the jobs cull at DB Cargo UK went too far and now there aren’t enough staff to cover the workload, which is why the agreed principles of rostering staff will not work. We have been reasonable, and have given DB Cargo 12 weeks to sort the staffing and rosters out. If they don’t, we may be back to a dispute situation.

“TSSA policy is to get freight onto rail. It takes lorries off our congested roads, and is therefore better for the environment and better for the economy. We are therefore keen to help keep Britain’s rail freight open for business. But we have real concerns about the strategy being pursued by DB Cargo UK, a German government-owned company that is operating business in the UK to a tune being called by Angela Merkel in Berlin.

“We have given DB Cargo UK 12 weeks to find realistic and workable solutions to the problems their current strategy is bringing to the British arm of their business. But the best long-term solution would of course be for the British government to take back control of rail freight from the German government and run it under British public ownership so it could serve the needs of Britain, not Germany.”

In a statement, the rail freight operator said: “DB Cargo UK has begun an exciting new way of working in order to provide an improved service for customers, but also to secure the future of our company and employment for over 2,000 members of staff. We have consulted with the trade unions from the start of the process to make sure we are still able to offer our staff the best possible terms and conditions as well as improving customer service.

“The transition process has taken place and a number of issues were reported, most of which we were able to rectify quickly. A small number remain outstanding which we are working to resolve as soon as possible. We appreciate there may be more reported issues as we continue to work with a new business model, but we do believe this is the best way for our business to run and in the future.

“We have worked incredibly hard to make sure this transition was effective and that our employees were aware of the changes and why we were making them. We understand that there will inevitably be concerns during a transition of this scale and that some of these points may be frustrating for the trade unions. We are maintaining an open dialogue and continuing to engage with them to work through a small number of outstanding concerns.”