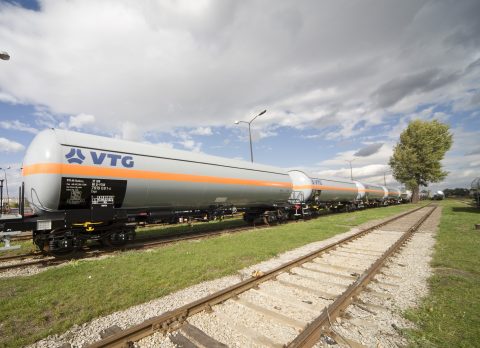 They are co-operating on the delivery of equipment to the Amur gas plant, which is being built near the city of Svobodny, about 100 miles north of the Chinese border. It represents a significant partnership between the largest multimodal logistics provider in the Russia/CIS region, and one of Europe’s biggest transport logistics providers.

Eduard Alyrzaev, Deputy CEO of RZD Logistics, said: “There are a number of large-scale projects in Russia, similar to the building of Amur gas processing plant, where VTG Rail Logistics plays the role of the main logistics provider. The successful realisation of these projects requires from the contractor a high level of expertise and successful experience on the track gauge of 1520mm.

“In the course of our company’s six-year existence we have gathered significant experience and competence, and are willing to provide logistics services of any complexity, including the supply chain management. I’m convinced that our partnership with VTG Rail Logistics will be successful not only for both companies, but for the end customer as well.”

In a separate deal, VTG Rail Russia has diversified its fleet by purchasing 220 chemical tank wagons for the movement of caustic soda from a subsidiary of the Russia-based United Wagon Company. Built in 2014, the wagons have been leased long-term until 2024 to RusVinyl, a joint Russian-Belgian venture whose shareholders are SIBUR (Russia) and Solvay (Belgium). VTG has taken over this hire contract in conjunction with its acquisition of the wagons.  This latest investment increases VTG Rail Russia’s fleet to a total of 3,300 wagons.

In November 2016, the wagon hire company had already bought 15 modern, insulated tank wagons to carry caustic soda. These were hired out on a long-term contract to Khimprom, one of the largest chemical companies in Russia. In the first half of 2017, VTG Rail Russia has continued to ramp up its activities in this wagon segment, supplying a further 15 caustic soda tank wagons to Khimprom in February.

Oksana Janssen, Head of Business at VTG Rail Russia, said: “We are very pleased that two prominent Russian chemical companies of the caliber of RusVinyl and Khimprom are convinced by what we have to offer. That has given us a point of entry to a very attractive market, and we have taken a major strategic step toward expanding our Russian business.”