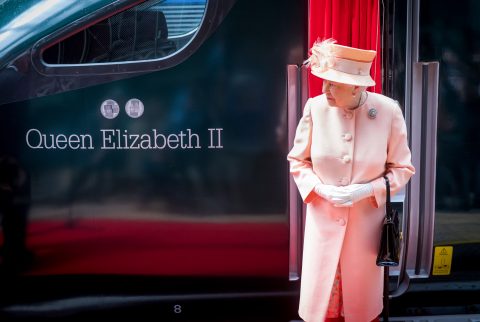 A GB Railfreight (GBRf) crew took Her Majesty Queen Elizabeth the Second for a ride aboard a new Intercity Express train, helping to recreate the first Royal Train journey in the UK when Queen Victoria was the guest traveller 175 years ago.

After making the short trip from Slough to London Paddington station, the Queen named the new Hitachi-made train 800003. She was joined on the journey by descendants of the famed engineer Isambard Kingdom Brunel, who designed and built the Great Western main line.

John Smith, Managing Director of GBRf, said: “It was a real honour to join Her Majesty The Queen in the naming of the new Intercity Express train on the occasion of the 175th anniversary of the first Royal Train journey by Queen Victoria. It was especially pleasing that GBRf could play a role in this memorable event by providing the crew for this operation through our successful partnership with Hitachi to test the new trains that will be rolled out by GWR later this year.

“This partnership represents a key part in the upgrade of the UK’s rail infrastructure and is part of GBRf’s commitment to diversifying and expanding its activities. I am proud that we have had the opportunity to work with GWR and Hitachi on this and that it showcases the work we do in a positive and forward-looking fashion.”