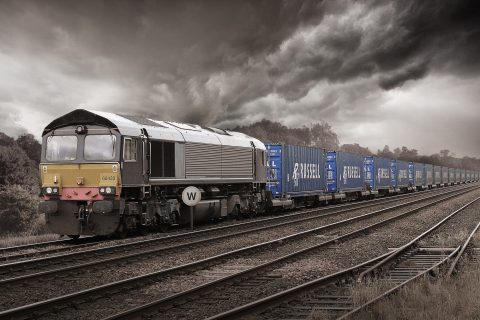 A big decline in demand for coal movements was a key factor in rail freight falling significantly in the UK during 2016/17, according to official figures. Rail freight moved fell to 17.2 billion net tonne kilometres, down three per cent on the previous year.

The Office of Rail and Road (ORR) says that of the seven categories of aggregates, coal – once the UK’s major rail freight commodity – fell the most, by 39 per cent to 1.4 billion net tonne kilometres. Freight lifted, or the mass of goods carried on the rail network measured in tonnes, exluding rolling stock, fell by eight per cent to 79.4 million tonnes, and is now at its lowest point since 1984/85. This is also largely due to a drop-off in coal demand.

While the last quarter’s (Q4 Jan-March 2017) 4.4 billion net tonnes of rail freight moved was up five per cent on the previous year’s corresponding period, it still represented the second lowest Q4 figure since the start of the quarterly time series in 1998/99. Metals increased in Q4 by 20 per cent thanks to their use in major rail projects such as Crossrail, while international movements rose three per cent to 0.1 billion tonnes due to increased rail freight traffic through Calais ferry terminal.

Domestic intermodal was best ‘rail freight moved’ performer last year, accounting for 39 per cent of the total, followed by construction materials (25 per cent); others, for example biomass (10 per cent); metals (nine per cent); coal (eight per cent); oil & petroleum (seven per cent) and international (three per cent). The closure of coal-powered stations ahead of national CO2 emissions targets in 2025 had a big effect on the amount of coal moved by rail to coal-powered stations.

The ORR statistics also cover freight delays per 100 train kilometres and freight market indicators, which show comparisons with other modes of transport. A downward trend in freight train movements continued in 2016/17 in general, with a five per cent year-on-year fall to 224,000 movements. This is the lowest since the time series began in 2003/04. Total freight train kilometres fell to 34 million kilometres, down three per cent on the previous year, and also the lowest recorded since these measurements began in 2010/11.

Freight lifted fell to 79.4 million tonnes in 2016/17, and of that 12 million tonnes was coal, down by 39 per cent on the previous year and the lowest since 1982/83. Oil and petroleum fell 11 per cent to 0.3 billion net kilometres, while ‘others’ fell to 0.5 billion, due to the removal of the climate change levy exemption for renewable source electricity from power stations. The ORR says this means generation of electricity through sources like biomass is ‘no longer as financially attractive’ as it was, with fewer orders from power stations for rail freight operators.

Pressure group Campaign for Better Transport (CBT), said the latest ORR figures showed what the future looked like for rail freight in the UK, and that the last year had been a ‘period of transition’ for the industry as it adapted to the deep decline in coal traffic.

Phillipa Edmunds, Freight on Rail Manager for the CBT, said: “Rail freight is the safer, cleaner way to transport freight which reduces road congestion and improves productivity; furthermore, it can help the Government meet its challenging targets to reduce air pollution as it produces 90 per cent less PM10 particulates (pollutants) and up to 15 times less nitrogen dioxide emissions than HGVs for the equivalent journey.

“Given these socio-economic benefits, the Government must set affordable charges in its current ORR review and continue to upgrade the rail freight network to cater for the suppressed demand for consumer and bulk services.”

The total number of freight train kilometres operated along the UK network in 2016/17 fell to 34 million, a three per cent fall on 2015/16 (down three per cent). The biggest operator was DB Cargo UK, which had almost twice as journeys as Freightliner, which in turn was roughly double that of GB Railfreight. Also included were Freightliner Heavy Haul, Direct Rail Services, Colas Rail and Devon & Cornwall Railways.

The statistics can be downloaded in full from the ORR website.