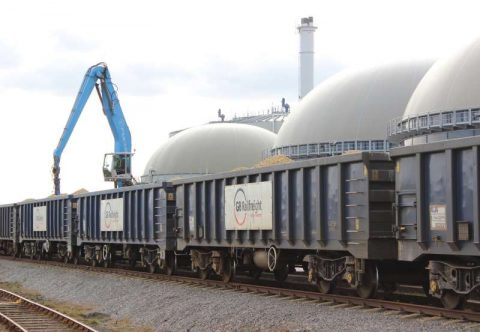 The first freight train carrying construction materials for Sirius Minerals’ new 2.4 billion Pounds polyhalite minerals mine and tunnel project in the north east of England has arrived, further boosting confidence in the future diversity of the UK rail freight market.

Laden with aggregates, the GB Railfreight-liveried wagons were received at logistics experts AV Dawson’s Teesside freight terminal, before being unloaded for onward road delivery to the site near the coastal town of Whitby, North Yorkshire.

The project includes the construction of the Woodsmith Mine, and a 23-mile tunnel to transport the mined ore to processing and harbour facilities on Teesside. Sirius Minerals have almost completed highways works to improve access to the mine, with construction at the site set to start in time for the mine’s planned opening in 2021. It is being seen as further evidence that the UK’s rail freight sector can still thrive in the face of falling demand for traditional goods such as coal, and particularly in the face of the uncertainty posed by the Brexit process.

The project will create around 2,000 construction jobs and more than 1,000 jobs at the mine once fully operational. Once operating at full capacity, the mine is forecasted to produce 20 million tonnes of polyhalite per year, generating 2.5 billion Pounds in exports and contributing 2.3 billion Pound to the UK’s Gross Domestic Product (GDP).

Neil McShane, AV Dawson’s rail manager, said: ‘Hundreds of thousands of tonnes of aggregates are needed for a project of this size. With these volumes we’re keen to promote rail wherever we can for the increased efficiencies and environmental benefits it can provide.

‘We’ve been in discussion with the various teams involved in this project for a while now. It’s really exciting to see this first train bringing aggregates into our rail terminal in preparation for the start of construction when this incredible project for the region actually becomes a reality.

‘We’re on hand to support the project in a number of ways, including rail and road haulage, importing material through our quayside and also providing a stockpiling facility to allow Sirius to better manage supply of aggregate by road to the site.”

It would make more sense to transport the aggregate material to the NEAREST rail head then off loading them onto road lorries . I would have suggested the Boubly mine or Whitby as a last resort . Or the extensive sidings at Skinning Grove would still be a lot closer even though further away ! This would have saved thousands of lorry movements and untold volumes of diesel pollutants !