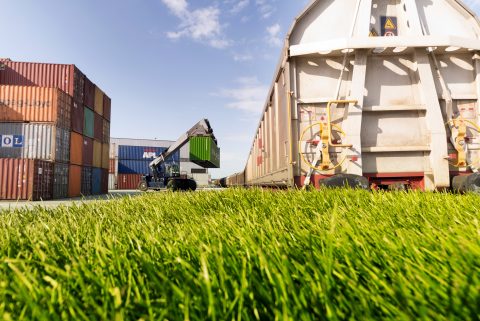 It follows a 36 per cent increase in freight volumes handled through the terminal in 2016, and Tibbett Logistics, the Romanian-based logistics specialist, expects further growth of up to 30 per cent this year among its established key clients. It says a major German retailer has already added substantial increases in container volumes in the first quarter of the year.

Part of the Keswick Enterprises Group, Tibbett Logistics’ investments include the acquisition of a third Kalmar/Cargotec mobile container handler, as well as satellite tracking for all mobile handling equipment in the terminal, which is expected to deliver substantial efficiency improvements.

Together with the owner of the P3 industrial park which houses BIRFT, Tibbett has advanced plans for the phase-three extension of the terminal platform later this year. This will add another 10,000 square metres of storage, mainly for empty containers, increasing BIRFT’s capacity and handling efficiency.

The principal driver of BIRFT’s recent growth has been imports of maritime containers through the Port of Constanta on Romania’s Black Sea coast. These contain primarily general merchandise for the retail sector plus parts and raw materials for automotive companies producing components in Romania for global car and truck manufacturers. Increased volumes at BIRFT led Tibbett Logistics to raise its block train frequency to five a week in the final quarter of 2016 – a level that is being maintained in 2017.

David Goldsborough, CEO of Tibbett Logistics, said: “The addition of the third Kalmar reachstacker at BIRFT and the extension of the terminal platform – both coming online this summer – are further signs of our commitment to the Romanian marketplace, and specifically the development of intermodal road-rail transport services. We continue to grow at an impressive rate year-on-year through the addition of new customers and from the growth in volumes of existing customers – confirmation of the reliability and efficiency of our services.”