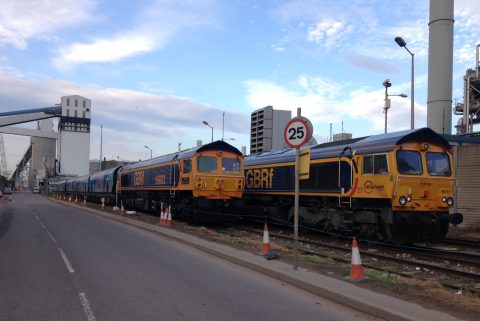 GB Railfreight (GBRf) has won a contract with Hitachi Rail Europe to test their newly-built electric intercity trains on the UK’s East Coast Main Line (ECML). GBRf will provide train crew for all aspects of the testing and commissioning programme until April 2020.

Testing of Hitachi’s electric trains begins this Spring, but the two companies have been working together since September 2013 to facilitate the testing and commissioning phase of the new bi-mode intercity trains, part of the Intercity Express Programme (IEP).

The first two electric-only test trains for the ECML arrived at Hitachi’s new depot in Doncaster, in northern England, in February.  As part of the contract, GB Railfreight will provide locomotives for transit movements and train crew throughout the test programme.

The contract will allow for type conformance – compliance with system specifications – and performance testing. This includes testing of pantograph performance, internal and external noise testing, as well as tests for running characteristics and braking performance. Electromagnetic compatibility (EMC) testing will ensure that the Class 800/801 trains will not interfere with the infrastructure and other trains operating on the lines.

John Smith, Managing Director of GB Railfreight, said: “The state-of-the-art IEP trains will transform rail travel in the UK and create opportunities for growth across several regions. I’m pleased that GB Railfreight has the opportunity to extend its relationship with Hitachi to ensure that these trains are tested and commissioned so that they are ready to deliver improved services.”

Andy Rogers, IEP Programme Director at Hitachi Rail Europe, added: “We take great pride in watching our new intercity trains run on the UK rail network. We look forward to working with GB Railfreight as we reach our next test milestone of running electric-only trains on the East Coast main line.”

Established in 1999, GBRf is the third largest rail freight operator in the UK. Since the end of last year it has been owned by EQT partners through its subsidiary holding company, the Swedish-based Hector Rail Group. It was recently announced that GBRf’s Chief Operating Officer, David Knowles, will become Managing Director of Hector Rail AB on April 10.