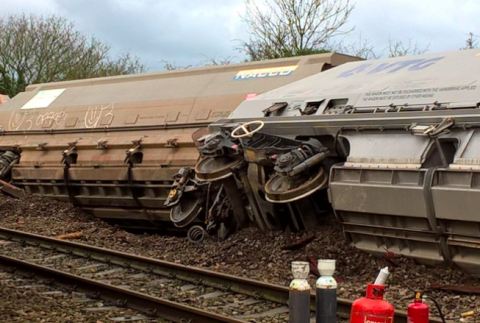 Severe network disruption caused by a derailed freight train carrying stone aggregate to the west of England may now last until the weekend. National rail infrastructure manager Network Rail says engineers are working ‘around the clock’ to reopen the stretch of track in Somerset.

The incident on Monday was said to have caused significant damage, tearing up track and sleepers. The Great Western Route arm of Network Rail, which operates the GWR passenger services on the line, has been using social media to live tweet coverage of the recovery operation, under the hashtag #SomersetDerail.

GWR said several wagons are still full of stone and sand, and engineers had advised that a great deal of preparatory work has to be carried out prior to them being moved or scrapped on-site.

Photographs of the scene include images of VTG UK wagons, and several more of some of the heavy lifting equipment which is being used in the recovery operation. The train is thought to have been pulling 38 wagons filled with stone and ballast, before seven of them derailed on Monday evening. The cause is not yet known.