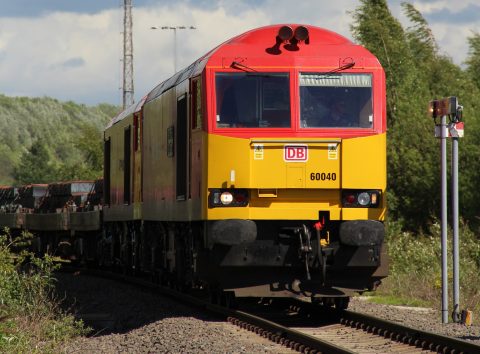 DB Cargo UK and Finnish steel supplier Outokumpu are celebrating 40 years of working together with a contract renewal that seals their partnership for the transportation of stainless steel.

The contract means three to four services will operate each week from Sheffield in Yorkshire to Immingham port in Lincolnshire, and one a week to Liverpool. Each train will carry around 1,300 tonnes of stainless steel.

The steel arriving at Immingham will be shipped to the Port of Gothenburg in Sweden, from where it will be moved by rail to Avesta and Degerfors in Sweden. Steel transported to the Port of Liverpool will be exported to the American markets. DB Cargo UK first began moving stainless steel on behalf of Outokumpu in 1977, when the melting shop in Sheffield – a city famed for its steelmaking – was first built.

Sonia Hampton, Account Manager Metals at DB Cargo UK, said: “We are celebrating 40 years of working with Outokumpu – the equivalent of a ruby wedding anniversary – and we continue to build on the excellent relationship we have with them. DB Cargo UK transports millions of tonnes of finished metals and raw materials across the UK and into Europe. The renewal of this contract reinforces our leading position in the metals sector.”

With a global operations base in the Finnish capital Helsinki, Outokumpu also has a presence in most European countries, as well as the USA and Mexico. In 2016 it delivered more than 2.4 million tonnes of stainless steel.

DB Cargo UK has also come to the aid of UK passenger operator, Virgin Trains East Coast, by loaning it a second Class 90 locomotive. It will be on loan for at least six months, operating on services from London to Newark in Lincolnshire, Leeds and York.

Richard Corser, Account Manager for Charters, Special Trains and Resource Hire at DB Cargo UK, said: “DB Cargo UK offers a range of services for Train Operating Companies such as on-board staff, drivers and of course the hire of locomotives. We are delighted to be able to provide our assistance to Virgin Trains East Coast through the loan of our Class 90s.”

The board of DB Cargo’s parent company Deutsche Bahn meanwhile has appointed has appointed Dr. Richard Lutz as its new Chief Executive Officer. Previously responsible for Finance & Control, Dr Lutz’s appointment is until March 2022. A series of changes have also been made to the group’s organisational structure. This includes the establishment of a new Freight Transport & Logistics department, for which Berthold Huber takes temporary charge of.