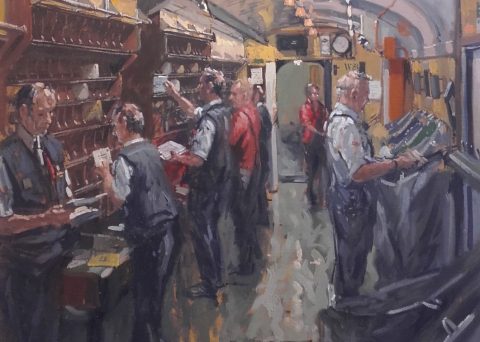 A DB Cargo UK guard who just happens to also be a professional artist is to have one of his signature works immortalised on a set of Royal Mail postage stamps. Ian Cryer’s oil painting shows postal staff working aboard the last-ever Travelling Post Office (TPO), which ended service in 2004.

His painting is to be part of the ‘Rail and Mail’ issue of stamps, produced as part of the Royal Mail’s 500 year anniversary celebrations. A commemorative print of the painting was also presented to more than 500 members of staff when the TPO services finished.

A guard aboard charter services operated by DB Cargo UK for the past 11 years, he first became involved in the business when he was commissioned to paint rail services for the company in its previous guise as English, Welsh and Scottish Railways (EWS) in 2001.

Ian, who has been painting professionally and exhibiting for more than 40 years, and is President of the Royal Institute of Oil Painters, said: “It is an honour to see my painting recreated as a one of Royal Mail’s Post & Go stamps. I am a lifelong rail enthusiast so it’s wonderful to combine this interest with painting.”

Ian created his masterpiece in 2003 after hearing that the Travelling Post Office services were ending. Incredibly, the painting was created at 90 miles per hour, as Ian travelled on a service from Plymouth to Bristol in south west England. It was completed in the railway sidings and at the Royal Mail depot at Bristol Parkway, where workers posed during their night shift. It was recently put on display in London,

“Combining my charter train job with my painting career allows me to see my subject from the inside, rather like Turner tying himself to a ship’s mast in a storm to experience his subject at close hand,” said Ian. “The Travelling Post Office was a memorable scene to paint, as at 90mph it’s quite difficult to keep a steady hand!”

The TPO services were an essential part of the UK’s postal network for decades, with mail sorted and stamped en route in order to be ready for delivery. After the privatisation of British Rail in the 1990s, the operation of TPOs was taken over first by Rail Express Systems and then EWS. In 2003 Royal Mail decided to suspend all transportation of mail by rail.

Very good !It reminds me of a Cuneo ! Where is the mouse ? I used to sweep these out in the carriage sidings during the day in the 80s and I remember all the elastic bands ,labels and takeaway wrappers I had to sweep up.I still remember the smell of the carriages . .Sometimes in the TPO I found the odd letter on the floor and used to leave it on the shelf in front of the pidgeon holes!