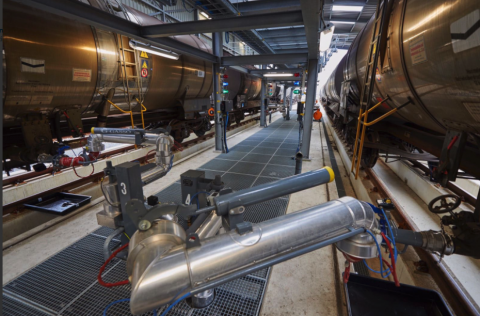 A new rail loading station at the Port of Rotterdam will further opportunities for the movement of fuel and gas oils. Dutch firm Koole Tankstorage BV is expanding its transhipment facilities with the new terminal, which has a capacity of 500,000 to 1,000,000 million tonnes per annum.

Koole, which also operates in Germany, the United Kingdom and Poland, is an independent international storage and transport company specialising in vegetable oils and fats, oleochemicals, waxes, biodiesel, base oils, non-hazardous chemicals and minerals.

In addition to the existing transhipment options for ships and trucks, Koole says the new facility in the Pernis region of Rotterdam means products such as fuel oil and vacuum gas oil could also now be transported by rail, followec in the future by mid-distillates, naphtha, gasoline, methanol and ethanol. The terminal also has a pipeline connection to the BP refinery in Europoort.

Originally launched as a one-man operation in The Netherlands in 1943, Koole now has terminals in Rotterdam (Pernis), Zaandam, Amsterdam, Nijmegen, Avonmouth, Liverpool and Gdynia.