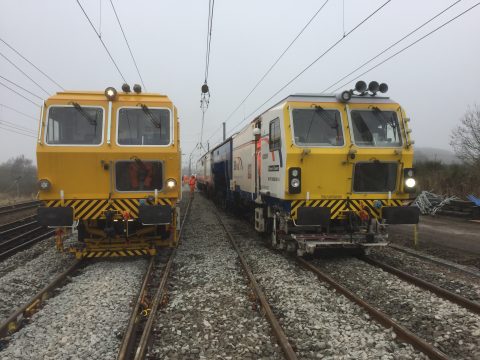 The world’s first ‘formation flying’ engineering trains could potentially deliver significant cost savings to freight operators in the UK. Network Rail, the UK’s rail infrastructure manager, is pioneering a double-track system which it says could save the company around 250,000 Pounds a week in compensation payments.

Its ‘formation flying’ technique involves a pair of engineering trains joined together by an umbilical, enabling them to run in parallel. They can deliver tamping and dynamic track stabilisation (DTS) simultaneously, which simulates the equivalent of some 200 trains passing over the track. The idea is that it cuts down the need to introduce speed restrictions after the work, saving Network Rail money through reduced compensation costs – potentially thousands of pounds – to train operating firms.

Although devised primarily with passenger services in mind, Network Rail told RailFreight.com there were potential savings to be had in terms of Freight Out Charges (FOCs), as freight services would also benefit from the upgrades and the reduced disruption to services.

Dan Donovan, Spokesman for Network Rail, said: “They too are affected by speed restrictions, just not as much as they not to travel as fast. An efficient, undisrupted passenger timetable will also mean an efficient undisrupted freight timetable too.”

The technique, described by Network Rail as a ‘world first’, was trialled over a weekend on a section of line in Bedfordshire where lines and switches were being replaced as part of the company’s Railway Upgrade Plan. The dual engineering trains ensured that the track and ballast were both firmly bedded in before regular services resumed.

Network Rail said they monitored the work closely and had assurances throughout to ensure everything had been done to the highest possible quality levels. This enabled trains to run at 125mph immediately, the first time this had been achieved. It now plans to use Formation Flying to repair and renew its entire 20,000 miles of track.

Steve Featherstone, Programme Director for Track at Network Rail, added: “We also opened the slow lines at a line speed of 75 miles per hour (120 km/h), which means that the freight service does not need to slow down to 50mph, increasing punctuality and reducing fuel consumption. It takes a lot of energy to increase the speed of a freight train from 50mph back up to 75mph.”

The work is part of Network Rail’s ‘high speed handbacks programme’ a comprehensive programme of track monitoring and installation work. It ensures track is installed at each stage to its specific design tolerances, care is taken while tamping to get the track to its final exact co-ordinates and that welding and stressing is completed as part of the core works where sufficient access is available.

“Our high speed handback programme journey started three years ago,” added Steve Featherstone. “We have been continually improving, systematically getting better at what we do. We have progressively built the knowledge and competence to handback plain line, high output and switches and crossing renewals.”

In its study, The Value and Importance of Rail Freight, Network Rail says it expects freight demand to have grown by at least 30 per cent by 2023 – the equivalent of 240 additional freight trains a day – and by as much as 140 per cent by 2030.