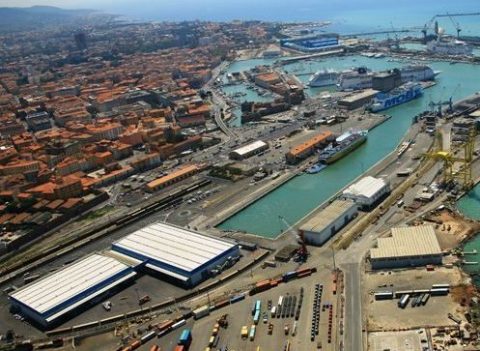 The Port of Livorno is on the way to becoming one of Italy’s major rail freight hubs after the opening of a new terminal. Around 40 million Euros has been invested in the project, which will finally realise the potential for a direct rail link between Livorno and the country’s main rail network.

This will ultimately mean a high-speed freight rail link to Europe is viable, after what the port describes as ‘decades of dislocation’ from the national grid. The new terminal was funded by both Rete Ferroviaria Italiana (RFI), the subsidiary company of the Ferrovie dello Stato Italiane Group responsible for rail infrastructure management, and the regional government of Tuscany.

Giuliano Gallanti, Chairman of Livorno Port Authority, said: “Investments in the port rail network will add to capacity and allow more traffic to and from the terminals. By linking directly the new infrastructure to the rail network, the facility will offer importers and exporters an all rail-route to warehousing and manufacturing centres in Italy and beyond.”

Graziano Delrio, Italian Minister for Infrastructure, said : “This is a unique project within the Mediterranean, and will be a calling card for Italy, which needs to become the wharf of Europe. With the new goods terminal at Leghorn (Livorno) Dockyard, we are completing the last mile that will allow the entire logistical system, and therefore the businesses that make use of it, to maximise efficiency via a direct link between sea and rail.

“It’s another dose of the ‘iron cure’ we have administered to the infrastructure and freight transport system, which is also planned as part of the reform of ports. The rail-sea intermodality between ports and rail freight corridors in Europe is one of the keys to ensure efficiency and innovation to the country’s production system.”

Crucially, the terminal and the new track connecting it with the Genoa-Rome rail line are able to accommodate the 750 metre-long trains which are becoming so important to network operators and customers within the European cargo market, and even more so with the recent opening of the new Gotthard Tunnel which links Italy to northern Europe.

Funding has come from RFI and Tuscany Region, and it provides a rail yard linked to Terminal Darsena Toscana, the port’s most strategically important container terminal, and three kilometre-long rail lines going from the port to national network.

Enrico Rossi, President of Tuscany Region, said: “The region is investing in Livorno port and we are willing to continue to do so in 2017, with the flying junction that will connect the harbour to the new freight depot, where we’ve invested nine million Euros out of a total 14 million Euros, as well as the Europa dockyard. The region has allocated 250 million Euros for the latter, committing its budget for the next 30 years.”