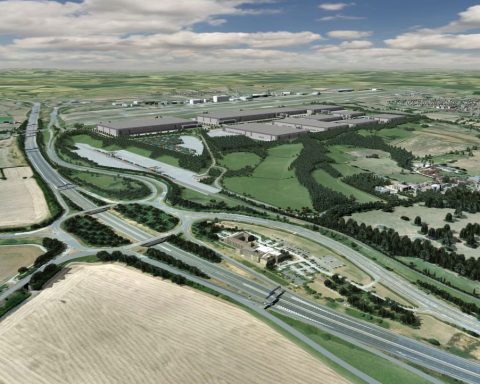 A major new rail freight terminal will start taking shape this month as part of a huge development at East Midlands Airport in the UK. Suitable for 750 metre-long trains, the terminal will connect directly with the National Freight Network and become a crucial inland port.

Situated adjacent to both the airport and M1 motorway, the freight interchange, which is due to begin operating in 2018, will have up to six million square feet of storage space and a terminal which is expected to handle up to 16 trains a day.

By linking to the rail and road networks, it will be a critical part of the East Midlands Gateway Project, which is expected to create more than 7,000 jobs, including many in the rail freight sector. The terminal will connect the site to the Castle Donington line, providing direct access to the UK’s major eastern and southern ports.

Roxhill Developments Group Limited, the commercial property company behind the the scheme, has now issued notice of a compulsory purchase order which sets out the land and rights that will be affected. Infrastructure works on the site, says Roxhill, are scheduled to start this month.

Councillor Trevor Pendleton of Leicestershire County Council, the authority which the orders have been submitted through, said: “It brings 7,000 jobs to this region. It takes off lots of freight from the roads and puts it on rail instead. The area is a really strategic location, but it is not just one, it’s a national plan – they are expected to be built throughout the country.

“The area between Derby, Nottingham and Leicester is a real sweet spot for infrastructure development, with the potential to become a fulcrum for economic growth in years ahead.

“We make things here in the East Midlands that are sold throughout the UK and beyond. This scheme sits alongside other major regional infrastructure developments taking place in the region, such as HS2, the electrification of the Midland Main Line and the Smart Motorways initiative.

“Taken together, these strengthen our ability to get people and goods in and out of the area, supporting supply chains and enabling local businesses to get their products and services to market quickly and more effectively.”