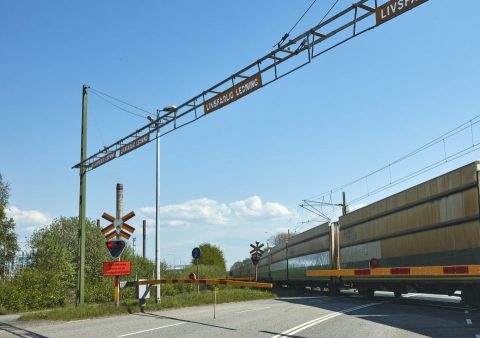 The Port of Gothenburg has opened a vital new cross-river freight link at one of the most important rail junctions for Swedish exports and imports. The double-track line over the Göta Älv River means that one of the country’s most vulnerable industry transport links has finally been addressed.

The South Marieholm Bridge was completed in March this year and at the same time the Swedish Transport Administration began renovating the North Marieholm Bridge. Renovation work has now been completed and the two tracks across the river have been opened.

Svante Jonsson, Project Manager for the Port Line at the Swedish Transport Administration, said: “Expansion of the Port Line is one the most important projects in our endeavour to increase freight traffic in Sweden and it is vital if the Port of Gothenburg is to grow. The combination of sea and rail is the most efficient multimodal transport alternative from both an environmental and economic point of view.”

The Port Line is one of the most important rail links in Sweden and allows freight traffic from the whole of the Nordic region to reach Gothenburg, the largest port in Scandinavia. Almost 60 per cent of container traffic in Sweden passes through the Port of Gothenburg. The Port Line currently carries 70 trains each day but now that the planned sections have been expanded, the potential daily capacity will be increased to 160 trains.

Magnus Kårestedt, Chief Executive of Gothenburg Port Authority, added: “The double-track Marieholm Bridge and the Port Line are crucial if freight transport to the port is to work effectively. More than half of the containers destined for the port already arrive by rail instead of by road. In the future, the number will increase even further.”

Until now, the rail link had been the most vulnerable point along the Port Line. If the only bridge that existed were to be damaged, or could not be closed, it would have major implications for industry. Analyses made by the Swedish Transport Administration showed that a stoppage lasting more than one week would cost industry in excess of 100 million Swedish Kronor per day.

The expansion of the Port Line, which is also partly funded by the European Union, comprises five sections, including the South Marieholm Bridge. The two first sections, the South Marieholm Bridge and the Kville marshalling yard, have already been completed. Four of the stages are included in the Transport Administration National Plan. The fifth section runs between the Kville marshalling yard and Eriksberg. The assessment is that the final stage will be needed eventually although for the time being the first four sections offer a sufficiently large increase in capacity.