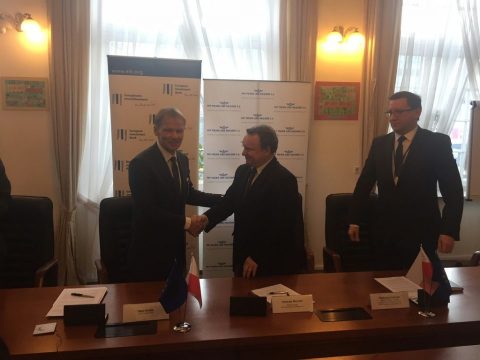 Polish railway company PKP has received an extended 175 million Euros loan from the European Investment Bank (EIB) to modernise more than 100 kilometres of line. It will cover the sections from Sadowne to Czyżew and Czyżew to Bialystok, part of the vital North Sea-Baltic Core TEN-T Corridor.

It means that both freight and passenger customers will benefit from long-distance and inter-regional connections, with Rail Baltica being the only railway connection linking the Baltic states with Poland and the rest of the European Union (EU).

Vazil Hudák, Vice-President for EIB activities in Poland, said: “This is a project with a European dimension and a strong climate action focus. We welcome this agreement with PKP Polskie Linie Kolejowe S.A. because it will result in better quality and higher use of passenger rail services and freight transport in Poland, generating significant energy savings and reductions in harmful emissions.”

Ireneusz Merchel, CEO of PKP Polskie Linie Kolejowe SA., added: “PKP Polish Railway Lines S.A. is using funds borrowed from the EIB to improve the efficiency of freight transport, within the Rail Baltica project, which is an important trans-European transport corridor. PKP Polskie Linie Kolejowe S.A. implements the National Railway Programme, worth more than 66 billion Polish Zloty, which will significantly improve the transport system and strengthen the competitiveness of rail.”

PKP Polskie Linie Kolejowe S.A’s signing of the loan agreement with the EIB for investment projects on the two sections of Rail Baltica were also approved under the Connecting Europe Facility (CEF) funding instrument for 2014-2020. The total project value is over 2.7 billion Polish Zloty.

In total, some 106 kilometres of railway line will be improved, including the construction of a new double-track bridge over the Bug River and an extra track on the Prostyń Bug-Małkinia section. This will eliminate the only single-track section currently in existence between Warsaw and Białystok and make the entire line between these two cities double-track.

The investment, says the EIB, will significantly improve operating conditions for freight railway undertakings. Thanks to the modernisation of the line and the elimination of speed limits, bottlenecks on this part of the TEN-T Corridor will be removed and freight trains will run at a speed of 120 km/h.

The projects on the Sadowne-Czyżew and Czyżew-Bialystok sections add to the portfolio of investment projects co-financed by national/EU funds and EIB loans, and are to be seen in the context of the long-term cooperation between EIB and PLK. Sixteen loans with the EIB have been signed so far, with approximately 2.8 billion Euros allocated to the co-financing of investment projects, together with a contribution from European Union grants.