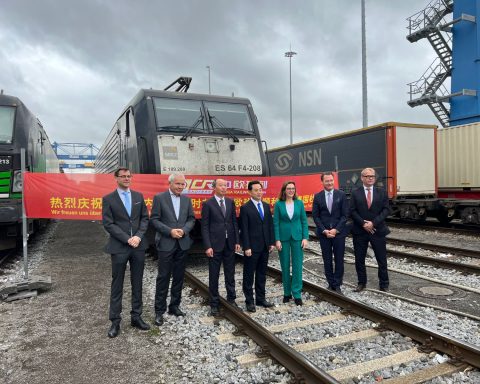 A record transit time was achieved for a train journey from Xi’an in China to Duisburg in Germany. The distance was covered in ten days, thanks to the newly established fixed timetable on the route. With this timetable, the train operates as if it is a long-distance passenger train. The regular transit time for a service on this corridor is two weeks.

Duisport has called it the rail connection 2.0. Previously, there was no concrete timetable for the service. Times of arrival were based on the situation on the ground in each respective country of transit. The new timetable is fixed. The parties involved know when the train is coming, and they all work together to reduce the transit time of the service”, explains Guanzhe Cao, Head of the Asia Desk at Duisburg.

The first train to operate on this basis left Xi’an on Wednesday 26 October and arrived on Monday 7 November at exactly 3:55. It covered the 9,908 kilometre journey in exactly 235 hours and 26 minutes, carrying 50 vehicles of photovoltaic inverters, electric compressors, vacuum cleaners and other goods. The train was welcomed with an official ceremony on Monday.

“This is a trial that may be extended to other destinations too, but for now it is the connection to Duisburg that is prioritised”, explained CAO. “This rail connection 2.0 means that the service is prioritised over other Eurasian services, although we cannot ask each party to prioritise the train on each section.”

“This is also one of the possible challenges we need to examine”, Cao continues. “A locomotive driver in one country may not be aware that a certain train service needs to be prioritised. In the coming months we will try to improve the service by tackling such challenges.”

The China-Europe Express, the rail freight service that runs between China and various hubs in Europe is already prioritised in China. At the border with Kazakhstan, it gets priority over regional traffic, for example. When capacity at the border is limited due to disruptions of whatever kind, it is often the China-Europe Express that gets the green light, in contrast to all other services.

It is however the first time that a particular service is prioritised with a dedicated timetable. When asked why Duisburg is getting this advantage, CAO cites three reasons: “It was the first destination of the China-Europe Express. The volume of this service is the largest, and we have a close partnership with China. Duisburg is the capital of the two continents.”

At the official ceremony, board member of Duisport Carsten Hinne commented: “Any improvement in trade routes between Asia and Europe strengthens the Port of Duisburg’s position as the central hub for rail freight transport in the European hinterland. China traffic via the New Silk Road remains an important part of the diversified business model of the Port of Duisburg.”