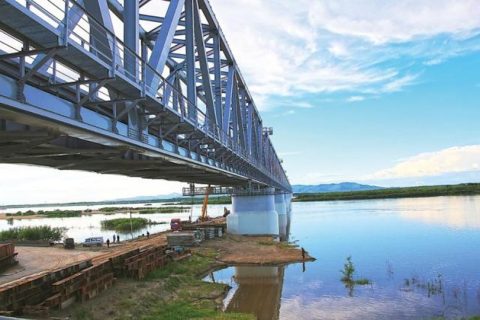 Russian and Chinese railways have agreed to increase the number of rail freight trains passing through their shared border crossings. Traffic has already increased in April, and the two parties aim to boost both westbound and eastbound volumes even more.

The agreement comes at a time when the two countries are very close to completing a beacon railway project. This is the first railway bridge crossing the Heilongjiang (Amur in Russian) river. The railway bridge will be operational in the coming August and will contribute significantly to the shared targets of the two countries.

Negotiations between the parties

“As a result of negotiations with Chinese Railways, we agreed to increase the transfer of trains through the shared border points gradually. In April, compared to March, traffic has already increased by 27 per cent in Zabaikalsk and by 10 per cent in Grodekovo. Export cargo transportation to China through Kazakhstan and Mongolia is also increasing”, stated RZD, according to an Interfax Russia report.

In addition, RZD underlined that cargo transported by rail from Russia to China becomes more diversified gradually. As a result, coal will is not the only cargo type moved eastwards. “The volume of submitted applications for eastbound transportation increased by almost 30 per cent compared to last year. In the first quarter of 2022, more than 3,5 thousand heavy-haul and 1,7 thousand combined trains travelled towards the East”, said RZD.

Speaking of border crossings between China and Russia that could help boost bilateral rail traffic, the Tongjiang Railway Bridge attracts much attention. The railway bridge has been under construction since 2016 and was completed in 2021. Currently, Chinese Railways are running test trains over the bridge, which will be fully operational by August. Estimations read that when operable, the bridge will shorten the train transit from Heilongjiang to Moscow by roughly 800 kilometres and 10 hours.

The bridge is paved with two track gauges. The standard gauge on the Chinese side (1435mm) and broad gauge (1520mm) on the Russian side. It connects Tongjiang city in the Heilongjiang Province of China and Lienningskoye, the Jewish Autonomous Prefecture of Russia. The Russian side is 328,57 metres long, while the Chinese side covers a length of 1,886 metres. In total, the whole bridge is 2,2 kilometres long.