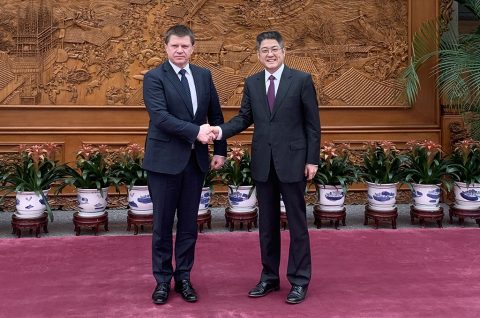 Belarus: “We will not prevent the transit of China-Europe trains”

Belarus will not prevent the transit of Chinese trains and will supply China with products previously supplied by Lithuania based on the development of its agricultural sector.

The Belarusian ambassador to China Yuri Senko explained that rumours claiming that Poland would cut the rail link with Belarus due to the refugee crisis on their shared border are false. As a result, Chinese companies do not have to worry about the possible impact of such development.

“I can assure on behalf of Belarus that we will continue to fulfil our obligations and ensure the smooth transit of Chinese goods as before. Moreover, we hope that Belarus will boost bilateral trade with China and use its geographical advantages to become a hub,” commented Senko to Global Times.

Belarus and the BRI

At a time when geopolitical issues along the route are on the rise, Senko’s statement is undoubtedly a reassurance to the Eurasian industry and a boost to Belarus’ economic development. According to Belarusian State Railways, the country’s rail container transit volume will be around 930,000 TEUs in 2021, increasing 29 per cent compared to the year before.

Moreover, Belarus’s total container traffic volumes for 2021 were around 1,245,000 TEUs, meaning that international transit volumes account for almost 75 per cent of the country’s rail freight. On top of that, China-Europe transit cargo increased by 1,3 times compared to the previous year. Specifically, Belarusian Railways handled an average of around 25 Eurasian trains per day.

In addition, thanks to the growing bilateral trade between China and Belarus, in 2021, 35 per cent of Belarus’ export container trains will be destined for China, equivalent to around 24,000 TEUs, an increase of 105 per cent compared to 2020. The railway company said it would continue to develop transit and export rail transport in the coming year, while focusing on solving infrastructure bottlenecks at Poland’s borders.