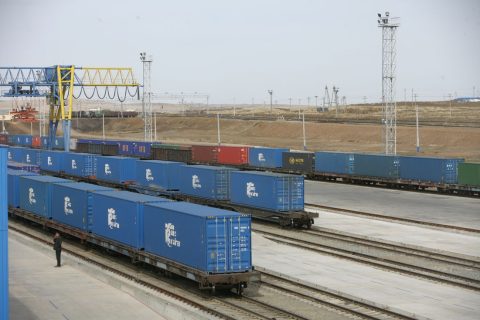 TransContainer acquired a second terminal to operate in the Zabaykalsk railway station on the Russian-Chinese border. The new terminal will complement the existing one. The acquisition results from Zabaykalsk’s strategic importance and a very successful year of train traffic.

The Russian intermodal operator has been active in Zabaykalsk since 2016. The railway station is the main inland railway container terminal at the Russian-Chinese border. The annual capacity of TransContainer’s terminal is 390,000 TEU. TransContainer and Russian Railways are currently implementing a project to enlarge the terminal capacity.

One terminal not enough

However, one terminal at the Russian-Chinese border is not enough for the company. That is why, in November 2021, it acquired the property of the International Terminal Zabaikalsk LLC at the border station. “The purchase of the second terminal was carried out as part of the implementation of one of the directions of Delo Group’s (where TransContainer belongs) strategy aimed at increasing production assets in key locations and building a natural transport bridge between the centres of production and consumption,” says the company.

The recently acquired terminal will see some improvements that will enhance its operability. Specifically, it will be reconstructed for handling containerised cargo and merged with the existing terminal of PJSC TransContainer into a single organisational and production structure, which will ensure the processing of containerised cargo in all directions.

The new and preexisting terminals in Zabaykalsk will work complementary to each other. The old terminal will focus on foreign trade and transit cargo, while the new one will function on the rearward, providing local work and declaration functions. After its reconstruction, the new terminal will increase TransContainer’s capacity in Zabaykalsk by 500.000 TEU.

Of course, the development did not come out of the blue. TransContainer’s operations in Zabaykalsk since 2016 have had an upwards trajectory, and 2021 was a record-breaking year. With 1,340 complete block trains dispatched via the railway station, last year was more productive than 2020 by 17 per cent.

“Assets development, enhancing the effectiveness of operations and growth of transportation volume are the priorities of our work. Due to coherent cooperation with Zabaykalsk railway station, we steadily increase the number of dispatches. We plan to dispatch ten pairs of trains a day and more than 3,000 trains a year in 2024. It will help us provide smooth handling of the rising cargo flow,” commented Sergey Mukhin, commercial vice-president of TransContainer.