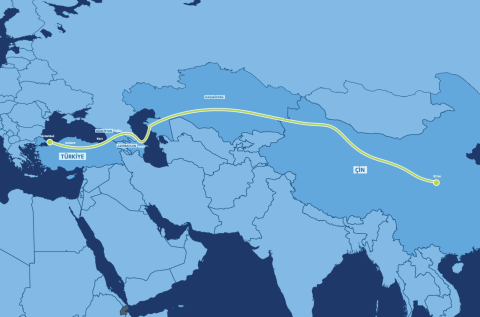 Are Turkey’s ‘muscles’ enough to place itself on the Eurasian map?

“You may have great muscles, but if your joints do not function properly, there is no point.” This metaphor was used by the CEO of Pasifik Eurasia, to describe the importance of junctions, or hubs in your network. The railway lines in this case represent the muscles, the junctions the joints where all traffic comes together.

Murat Karatekin, who heads the Turkish operating company, joined RailFreight Live last Friday for an interview about the increasing role of Turkey on the New Silk Road. More and more transit traffic is routed through the country that is connected to Central Asia on one end and to Europe on the other. These volumes are expected to increase even more with the infrastructure investments recently announced by the Turkish government.

The joints must function

But first about these joints. One such place where everything comes together is Kars, the Turkish end (or beginning, depending on your perspective) of the Baku-Tblisi-Kars (BTK) railway line. This railway line or ‘muscle’ connects Azerbaijan, Georgia and Turkey, and this is an essential part of the Middle Corridor, which aims to route traffic via the Caspian Sea to Europe. Ever since the opening of the BTK line, traffic between Turkey and China surged.

In order to handle this traffic, the Kars Logistics Centre was built. The facility was constructed with governmental funds to facilitate Eurasian traffic. It covers an area of 400,000 square metres and has a capacity of 412,000 tons. Most importantly, it has 19 railway lines able to accommodate multiple trains every day.

Until recently, the logistics centre received relatively few trains, but the numbers started increasing when the junction was better served, explained Karatekin. “A short-distance shuttle system was launched between Kars and the border with Georgia.” Suddenly, the number of trains and wagons increased by 35 per cent.”

Yet, the government decided to invest in this place, and Karatekin understands why. “It gives the supply chain flexibility.” It is exactly what a joint needs to keep the muscles operating.

Together with the volumes in Kars, the volumes on the BTK line are on the rise. According to Karatekin by four times, and this trend is likely to continue. “Where we had eight routes up and running beginning this year, we now have 11 routes, and this is likely to be 13 routes early next year.”

What is expected to make a huge change is the infrastructure upgrades. The Turkish minister of transport and infrastructure, Adil Karaismailoğlu, last month announced that his country will increase rail freight investments by 60 per cent. Specifically, Karaismailoğlu mentioned that Turkey aims to shift “30 per cent of the volumes passing through Russia and the Northern Route to the Middle Corridor via Turkey”.

In order to realise this, Turkey is working on its connections to Europe as well. After all, the Middle Corridor serves those markets that are geographically closer to Istanbul than to Poland or Russia. However, due to good partnerships this coverage area reaches all the way up to Austria, as Pacifik Eurasia shows.

“We now operate forty blocktrains per week between Europe-China. Towards the west, we go to Hungary and Austria, and from there to other western countries”, says the CEO. “Next year, we plan to increase the number of blocktrains to Europe.”

In this direction, Köseköy is the junction where everything comes together. From this terminal, the company runs many trains to and from several countries in Europe.

Turkey on the map

Turkey is gradually gaining an important spot on the map, and this can only become a more important spot looking at the promises of the Turkish government. Equally important however, is the way the railways are managed.

Karatekin concludes: “Yes, we do see a rising demand and expect even more demand for services through Turkey. Do we have the capacity? Once these infrastructure upgrades are completed, we do. But the challenge is to manage these flows. If we do this right, Turkey can play an increasing role on the New Silk Road.”

Do you want to learn more about the Middle or Southern corridor on the New Silk Road? At the European Silk Road Summit, a break out session is themed after these topics. This event starts tomorrow 7 December and you can still register for online participation.