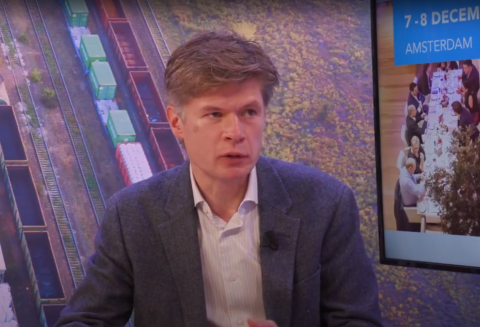 Published on 17-11-2021 at 06:00
Photo: Frans-Paul van der Putten in an older appearance at RailFreight Live.RailFreight.com

While the political tension between the EU and China increases, the two markets seem to get closer economically, and this is all because of the New Silk Road. This contradiction was pointed out by Frans-Paul van der Putten, researcher at the Clingendael Institute.

The relation between these political and economical developments is the focus of his research, and the Belt and Road Initiative is one of the core projects he looks into. Together with Xiaoxue Martin, he will talk about this complex dynamic at the European Silk Road Summit, but he already gave a sneak preview during the latest edition of RailFreight Live.

“If you want to understand China politically, you need to look at the economics. The interrelation between these two has only increased over the years, they can no longer be seen apart”, says van der Putten.

But, there is something interesting to be observed. While political relations between the EU and China have worsened over the years, the market has shown a shift in the opposite direction. Whereas the New Silk Road was looked at with little confidence ten years ago, it is now much more visible that it is very feasible and economically more important. Therefore, it can be considered a symbol of increasing integration of Eurasia.”

It is this increasing contradiction that catches the attention of the researcher, not only within the context of EU-China relations. “Geopolitical rivalry with the US may have been one of the reasons why China launched its Belt and Road Initiative in the first place”, van der Putten notes.

“In my belief, it is not a coincidence that the Belt and Road initiative was launched at a moment when geopolitical tension with the US was on the rise. With its military presence in Southeast Asia, the US was concerned about the Chinese influence in this region and hence, increased pressure on China.

“This was an extra impulse for China to look more west. It became more concerned about the resilience of its trade connections. Europe is an important economic partner. The new Silk Road provides China and international companies with additional options.”

That this economic integration of the Eurasian space has improved becomes clear when you look at the figures. The volumes of goods that are transported by rail across the continents continues to increase. From 2016 until 2020, these volumes grew 7.9 times. Even during the pandemic, these volumes did not cease to move up.

While there is still a considerable communication gap between Europe and Asia, there is progress in this sense too. There are European companies that establish offices in China, Chinese companies with branches in Europe and staff is increasingly exchanged overseas. Even educational programmes are now more adjusted to the new market area, with courses and exchange programmes on New Silk Road trade.

At the same time, political leaders have not come closer together. Van der Putten draws an example: “In 2019, the EU Commission published a report in which it stated that China is not only an international partner and economic competitor, but also a systematic rival. This caught the attention of the Chinese government, which became aware of the more critical attitude of its EU counterparts. This year, there were sanctions and counter sanctions. The EU is mostly concerned about the influence of Chinese state-owned entities in the EU, it favours purely B2B business. Political relations between the EU and China have surely become more complicated.”

It is the second time that van der Putten speaks at the European Silk Road Summit, an event that he follows with great interest. “I am hoping to include geopolitics in the discussion about the Belt and Road initiative, while I find it interesting to hear more from the market, which is driving this development.”

The European Silk Road Summit takes place in Amsterdam, the Netherlands on 7 & 8 December. Van der Putten and Xiaoxue Martin will speak in the last session of the second day, followed by an audience wide debate. Interested? You can have a look at the programme here. Or, you can register here.