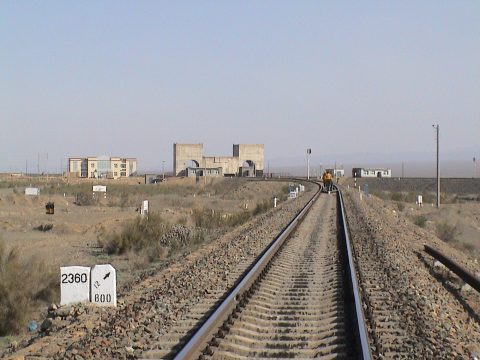 Rail freight traffic at the New Silk Road borders of China did not come to a standstill last week, contrary to what had been announced. In week 41, China Railways had released an official mandate to stop the loading of Europe-bound trains via the border crossings of Alashankou and Erenhot from Monday 25 October. The day after this mandate was released, it withdrew this decision.

The Alashankou border crossing with Kazakhstan, which is the main route for Europe-bound rail freight, was to be closed until today, Monday 1 November. The Erenhot border with Mongolia, the second-most consumed route, would have been shut for three days: until 28 October. Considering the volumes passing through these border crossings, the impact of only one day of closure is already dramatic for the corridor.

Too little capacity for too much cargo

It was however exactly these pressing volumes that seems to have led to the temporary thought. Westbound volumes, which in this case means rail freight trains heading for Europe, make up for the bulk of all traffic passing through these borders. Since the pandemic, these volumes have only increased. UTLC ERA, the main operator on the broad gauge section on the New Silk Road, reported an increase of 36 per cent in the first nine months of this year, compared to the same period last year. A total of 4,499 container trains were operated by the company.

At the same time, the border crossings are dealing with less, rather than more capacity. Some time ago, the border points of Khorgos and Alashankou saw a succession of Covid-19 cases, making prevention operations at the ports more demanding. Kazakhstan’s local TV station Хабар 24 Live said that since August, the capacity of the China-Kazakhstan border crossing had been reduced significantly. At Alashankou, trains transiting from China to Kazakhstan have dropped from 16 to 5-6 per day, the media source says.

Eurasian traffic not the only traffic

With this reduced capacity and increasing traffic, the tension is rising at the border. Because it is not only traffic to and from Europe that runs through these borders, there is regular rail freight traffic between the countries around these borders as well. Until now, Europe-bound traffic was always prioritised, and apart from the almost decision last week, it was never halted. Instead, it is regular traffic that is halted from time to time, to give room for Eurasian flows.

This has not gone unnoticed by Kazakhstan, which sees its cargo flows as being jeopardised. In fact, frustrated Kazakh traders last week demanded their government block the passage of Chinese cargo trains to Europe until China resolves the bottleneck, as was reported by Reuters. According to official figures, around 5,000 railcars filled with Kazakh goods are still stranded at the border due to recent restrictions.

While China Railways is responding to the congestion with temporary shutdowns for other traffic from time to time, the real, more sustainable solution is probably in the success of alternative routes. These alternatives are picking up, but very slowly. According to RDZ Logistics, the main route for westbound traffic accounted for 79 per cent in 2020, and for 68 per cent in 2021. This means that more traffic was moved away from the busy border crossings.

The most popular alternative route is Kaliningrad. In terms of westbound volumes, the shares of transit via this Russian enclave grew from 4 per cent to 13 per cent this year. But also transit through Ukraine and Finland is getting on the radar of logistics companies. More and more trains tested these routes in 2021, although they still take account of a very small share of the total traffic volumes.