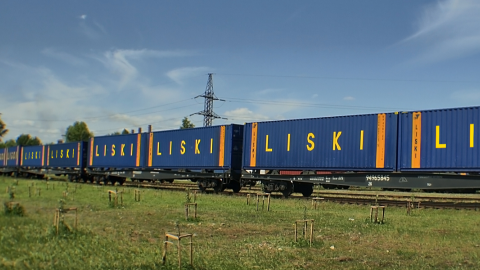 First Ukraine export train on its way to China

The first export train from Ukraine to China commenced a few days ago, and it’s on its way. It departed from the Lisky container terminal in Kiyv, and its destination is Xi’an. This is a historically significant development since there have been no export trains from the Eastern-European country to China before.

The train consists of 43 40-foot containers carrying lumber. After a trip of 18 days and more than 10,000 kilometres, it will reach Xi’an. It is not a regular service yet, but Ukrainian Railways claim that this could happen in the future.

Nevertheless, as the Ukrainian infrastructure minister Oleksandr Kubrakov underlined, the service is an initial attempt for Ukraine to “integrate into the global system of multimodal transportation, which is expanding rapidly and defines modern logistics. For example, in the EU, the share of container traffic is about 45%. In Ukraine, we are talking about only 2.5%”.

In total, Ukraine has received 52 trains from China so far. The country is steadily attempting to establish itself as a New Silk Road transit and final destination, while the first east-bound train is undoubtedly a milestone.

However, despite the developing steps, the country still faces problems with its infrastructure, not allowing it to grow more. “At present, we cannot make full use of the factor of our geographical location because our railway and port infrastructure is still outdated,” said Kubrakov.

“At the same time, we cannot ignore the demand and potential of multimodal transportation, in particular with Asian countries, so upgrading and building infrastructure for the sea-railway format will be one of the main tasks of the ‘Large Construction’ in the coming years,” he concluded.